Where in the World Does Green Building Go? 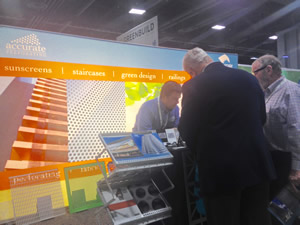 Accurate Perforating was just one of the exhibiting companies to say they see Texas as a major growth area. For example, the company just supplied 3.2 linear miles of architectural components for a 40-story high-rise outside of Houston.

Seattle. Russia. China. These were a few of the places Greenbuild exhibitors were naming when asked where they were seeing growth domestically and abroad. While virtually everyone interviewed for this article reported strong conditions across all sectors, there were a few outliers experiencing above-average activity, exhibitors said.

“All metro areas have growth,” said Mark McNichol, director of sales at Kalwall Structures Unlimited. “Texas has been very busy, but currently we’re starting to see a good uptick in budgeting and early design products [nationwide].”

Texas was a state more than one person mentioned as doing well, which shouldn’t come as a surprise. The Long Horn State increased its population by 7.2 percent from 2010 to 2014, second only to North Dakota during those four years.

Chris Berthold, architectural project manager for Accurate Perforating, said the metropolitan areas of Houston and Austin are seeing an uptick in particular.

Besides Texas, Jim Andrus, vice president of sales for Kalwall, said the company has seen extraordinary development in a lot of second- and third-tier cities.

More than one exhibitor mentioned Chicago and San Francisco as growing markets for them, while Eric Niemeyer of Architectural Grilles & Sunshades said Charlotte, N.C., and Denver are some of the strongest metro areas for the company. Salt Lake City was another city he named.

Despite reports of corruption, a devalued currency and severe economic slow-down, at least one exhibitor at Greenbuild still believes in Brazil, and that’s Alucobond, manufacturer of aluminum composite materials.

“We’re seeing a lot more focus on the area because we’re seeing growth there,” said Ben Branham, architectural marketing manager for the company. “We also have renewed focus on Chile. It’s the most stable.”

Even the Euro Zone is getting new attention from companies, specifically in Spain and Germany, which have reclaimed economic dominance, said Ensinger Inc.’s Steve St. Pierre.

Lastly, China. Not every exhibitor at Greenbuild operates internationally, but those that do try their very best to have operations in the world’s most populated country. China has seen an annual growth of 7 percent year after year, though not all of the activity can be considered “green,” said Oliver Holleber, managing director for HalfenUSA.

Holleber explained that governments in developing nations, including China, want to better their current infrastructure, but “that, unfortunately, leaves the green aspect out.” Those nations will still utilize Helfen’s products, but not the cutting-edge, energy-efficient products that are popular in Europe and the U.S.

Greenbuild has one more day to go. Tune in to USGNN.com for more show coverage throughout the week.