There’s plenty of building to be done in 2016, and construction firms throughout the United States are prepared to grow the sector’s workforce to meet the demand.

According to survey results from the Associated General Contractors’ (AGC) annual industry hiring and business outlook, 71 percent of construction firms plan to expand their payrolls in 2016 as contractors expect both public and private markets to grow. However, whether firms are able to tackle key challenges such as a shortage in skilled labor, regulatory burdens and technology concerns successfully remains to be seen. 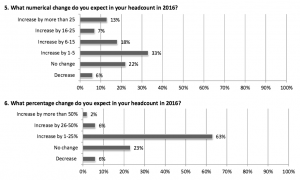 “[T]he industry faces a number of challenges that have the potential to dampen, and possibly even undermine, the sector’s recovery,” AGC chief executive officer Stephen E. Sandherr said on a media conference call last week. “… In other words, 2016 won’t be easy, but [it] should definitely be a good year for many construction firms.”

By region, contractors in the Northeast are most optimistic about multifamily construction (27 percent net positive), while Midwest firms are more hopeful about retail, warehouse and lodging (17 percent). Contractors in the South see hospital construction (25 percent) as the best prospect, and firms in the West are most optimistic about the private office market (28 percent net).

Positives aside, construction firms continue to deal with shortages of available workers. Seventy percent of firms report they are having a hard time finding either salaried or craft professionals. Sixty-nine percent of respondents predict labor conditions will remain tight, or get worse, during the next 12 months.

“What is particularly striking about the findings on worker shortages is that they are consistent with the responses from last year’s outlook,” said Simonson. “In other words, after a year of raising pay and increasing benefits, contractors remain as worried about the lack of qualified workers as they were at the beginning of 2015.”

Seventy-nine percent of firms report the cost of providing healthcare for their employees increased in 2015, while another 81 percent expect their healthcare costs will increase in 2016. Even as firms spend more on healthcare coverage, they are prepared to increase investments in information technology (IT).

Nineteen percent of contractors cited the lack of cooperation from federal regulators as a major safety concern, while another 40 percent said it was a minor concern.

The survey was conducted with Sage Construction and Real Estate. Sage vice president and general manager Jon Witty was also on the call and focused on IT challenges. (Stay tuned to USGNN.com™ next week for more coverage.)

The outlook was based on survey results from over 1,500 construction firms from all 50 states and the District of Columbia.