Berkowitz went to the University of Pennsylvania–where he met his wife Barbara–to study economics before finishing his education at Temple. After college and law school, he joined his father’s company full time in 1950, where he spent his entire career and helped grow the business to the large fabricator it is today.

“Ed was a real entrepreneur in every sense of the word. More than that, he was a smart businessman who crafted his company not only for the next year but for the generations to come,” says USGlass magazine publisher Debra Levy. “He built his company to last and to grow, and he always believed in the strength of the individual fabricator.” 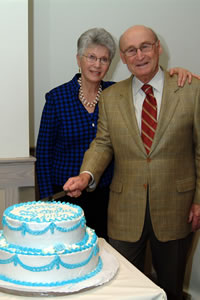 Edwin Berkowitz with his wife, Barbara, at his 80th birthday celebration in 2006.

[To learn more about Berkowitz, read an extensive interview with USGlass magazine just after the company moved into its current 200,000 square-foot facility in Pedricktown, N.J.]

“Ed Berkowitz was a giant in the industry and his legacy continues with his son Arthur,” GANA executive vice president Bill Yanek said in a statement. “Ed’s leadership and impact won’t be forgotten.”

“I was fortunate enough to attend a major anniversary celebration for his company a few years back, and you could see, even more importantly than anything, how much his children and grandchildren adored him,” says Levy. “He has a wonderful business and family legacy.”

Services for Ed Berkowitz will be held Tuesday at 10:30 a.m. at the Har Zion Temple, 1500 Hagys Ford Road, Penn Valley, PA 19072, followed by interment at Roosevelt Memorial Park. Contributions in his memory may be made to Crossroads Hospice or a charity of the donor’s choice

In honor of Berkowitz, the company’s plant and offices with be closed Tuesday, January 12.

USGNN.com™ will bring you more information as it is made available.

If you would like to pass along a note to the family, please leave a comment below.

6 Responses to Edwin Berkowitz Passes Away