Mother Nature has treated the mid-Atlantic region to a mostly mild winter this season. This weekend, it appears to be payback time. 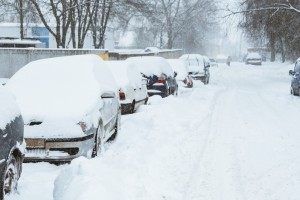 According to the Weather Channel, “Winter Storm Jonas is expected to bring heavy snow to at least 15 states, with blizzard conditions possible in Washington, D.C., Baltimore and New York City. At least 1 foot—and up to 2 feet—of snow is likely from Eastern Kentucky through West Virginia, Virginia, most of Maryland, D.C., northern Delaware and parts of Pennsylvania and North Carolina. … Multiple states have issued states of emergency in preparation for the wintry conditions.”

That has prompted residents and businesses in the area, including those in the glass industry, to make adjustments and weather the storm as best as possible.

Nancy DeZarn of Dulles Glass, which has locations in Manassas, Va., and Silver Springs, Md., says her company is running a “limited schedule” Friday and Saturday. “Only essential personnel will likely be working on those days,” she says. Dulles has either cancelled or moved most of its appointments for those days. “A lot of customers called in and cancelled themselves,” she says.

S. Albert Glass, located in Beltsville, Md., typically runs a busy weekend schedule but had to cancel its jobs this weekend. For the service work that can only be done on Saturdays, president Michael Albert says they will have to re-schedule on future weekends accordingly.

“In terms of work on the contracting side, that may mean working extra hours in the upcoming week to make up for time planned over weekend,” he says.

The timing has its pros and cons. DeZarn says that because the storm will have the biggest effect over the weekend, it won’t impact her company’s schedule for on-site appointments as much as if it were during the regular week. However, Dulles isn’t expecting much activity in the showroom over the weekend and will adjust its hours accordingly.

DeZarn adds that the re-scheduling of canceled appointments hasn’t been too difficult so far despite the fact that the company’s schedule is fairly busy for the next four weeks.

Albert says he’ll keep an eye on the storm Friday morning to decide whether or not to close early. “I don’t want my vehicles out there trying to get back, then having people sit in four, five or six hours of traffic trying to get home,” he says.

S. Albert has two trucks with snow-plowing capabilities. “We’ll probably have people taking the snow plows home with them, then probably come in Sunday to begin cleaning up everything here so we can hopefully not miss too much of a beat Monday,” says Albert. “Since we have snow removal equipment, we’re not relying on other people, so we can pretty much take care of our own needs. And we have people that work here willing to do whatever it takes.”