Construction Employment Up in Most Metro Areas

More than half of metropolitan areas in the U.S. added construction jobs from December 2014 to December 2015, according to analysis of federal employment data by the Associated General Contractors of America (AGC). 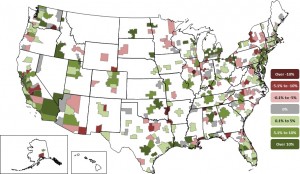 Construction employment increased in 190 out of 358 areas, was unchanged in 63 and declined in 105.

“There were nearly twice as many metro areas adding construction jobs in 2015 as there were areas losing jobs,” says Ken Simonson, AGC’s chief economist. “Considering current economic trends and our members’ forecasts, many firms should continue hiring workers this year as demand expands.”