The Big Apple is a big builder. New York City led all U.S. metropolitan areas by dollar amount of construction starts for commercial and multifamily building in 2015, according to Dodge Data & Analytics. 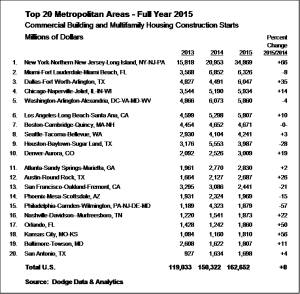 “The construction start statistics do show some deceleration for the commercial building sector at the national level during 2015, after the substantial gain witnessed during 2014,” says Robert A. Murray, Dodge’s chief economist. “The recovery for commercial building has so far been hesitant, with periods of increased activity often followed by a pause. On the plus side, factors such as generally rising employment and declining vacancy rates should encourage further growth for offices, hotels, and warehouses, while store construction remains more problematic given the shifting retail landscape.

“In comparison to commercial building, the upward progression by multifamily housing has been steadier, with 2015 marking the sixth straight year of double-digit growth, helped in particular by yet another substantial increase reported for the New York City metropolitan area.”

New York City saw a 95-percent hike for commercial building and a 52-percent jump for multifamily housing. In 2015, 43 multifamily projects valued at $100 million or more reached groundbreaking. The dollar amount of multifamily projects in the area comprised 27 percent of the national multifamily total in 2015, up from 21 percent in 2014 and 16 percent during the 2010-2013 period.

“The multifamily market in New York City has been lifted for several years now by increased demand from foreign investors, and 2015 saw an additional push in the year’s first half as developers worked to get projects started prior to the June 15 expiration of tax incentives for multifamily projects under the 421-a program,” says Murray. “That program was subsequently extended through January 15, 2016, and a new program was set up to cover 2016 through June 2019 with this important provision – multifamily developers and construction labor unions need to reach an agreement on the prevailing wages of construction workers performing work on 421-a projects.”