Room for Growth in Modeling for Building Envelope Contractors

Specialty trade contractors are getting increasingly involved in building information modeling (BIM), according to a new report.

Tuesday, Steve Jones, senior director of industry insights research at Dodge, held a webinar to discuss findings from the study. 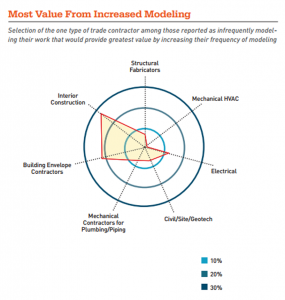 Contractors in particular saw lower final construction cost to be the biggest benefit of BIM practices, while engineers reported reduction in material waste as the most positive.

Low levels of collaboration, however, continue to be a hurdle. “If you’re going to focus on something to improve, that’s a real important place to focus,” Jones said.

Part of the survey compared the frequency of particular practices versus their perceived value. One striking trend was that early involvement from the specialty trades is still low, yet respondents to the survey put an especially high value on their participation.

According to the survey, platform compatibility wasn’t important to contractors. “We think we’re going to see that change as more and more trade contractors are doing construction modeling and there is more active exchange in modeling going on between players in the contractor world,” he says.

According to the report, building envelope contractors represent the most important opportunity for growth, as only about a third (34 percent) of respondents say they model frequently, while nearly three quarters (71 percent) of that group assigns a top value to their participation. “This is a clear demand signal from the market and a potential competitive edge for model-savvy envelope contractors,” the report reads.

Jones also discussed information mobility. Respondents expect the biggest growth in this area to be online meetings and cloud storage devices. Meanwhile, handwritten documents and notes continue to be on the decline.

Over the last two years, contractors saw the highest level of improvement in information mobility.

“[This] is great, because they’re the ones who need to bring that model-based information out into the field, spread it between the trade contractors, get it out to the fabricators, and really make it a rich use of this information at the site,” says Jones.

Overall, Jones says the industry is at a point where it can compare actual quantitative measurements of newer projects based around BIM versus previous projects using traditional methods.

“You’re getting more than half the respondents who say they can actually tie acceleration of completion or reduction of construction cost to employing a model based project,” says Jones. “This is powerful stuff. It’s going to get the rest of the owners and contractors who are on the sidelines to say, ‘I want to do that.’”