Equipment and software companies are critical to the development of glass processing automation, but it’s the users of those technologies who drive innovation based on their needs. Industry members from various parts of the sector, including glass fabricators, joined this week in San Diego for Glass Processing Automation Days (GPAD).

Wednesday, FeneTech president and CEO Ron Crowl hosted a forum of fabricators on how they implemented their current ERP software systems. 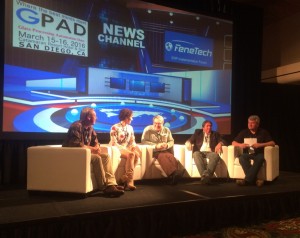 The ERP Implementation Forum was one of two fabricator-based discussions at GPAD this week.

“There ended up being too many platforms and multiple data entry points,” said Arnold. “Our aim was to consolidate this down to one platform … and one that would be around for a long time.”

John Dwyer, president of Syracuse Glass, said his company didn’t develop its own software. However, as the program he was using became more auto glass-focused, his company sought out a new long-term solution.

“My mission was to find software we’d stick with for the rest of my career,” he joked.

Arnold said the most surprising thing about the implementation process was initial resistance and hesitancy from employees. Martini agreed.

“The most challenging thing is the training of the people,” she said. “Change is hard for everybody.”

Arnold added, “But of course, it eventually became a big success for us.”

Dwyer said if he could change one thing when looking back at the implementation process, he would “get more people involved… more people who were going to be impacted on the initial decision. And maybe we’d do even more training.”

Kelley and Arnold said their companies didn’t have an IT department when implementing the software. “It would’ve helped to have an ‘IT mind,’” said Kelley.

Arnold said one pleasant surprise with the ERP software is the ease at which information can be tracked from anywhere. “From here at the conference, I can look at my phone and check on capacity, inventory, etc.,” he said.

Added Martini, “A great surprise to me is to have someone on the floor, a manager saying, ‘It would be helpful if we could do this,’ and then we find out that we can do that particular thing.”

Syracuse Glass now has monitors throughout its facility displaying information in “nice graphical formats,” which has increased employee involvement in the data.

“Before we had the software, we had like six people looking at information on a monthly basis,” he said. “But now, it’s nice to see so many people being concerned about what’s going on, checking the numbers and percentages. Almost everybody in the company is looking at these things… and that leads to better outcomes.”