A lot can get accomplished in a small amount of time when a dedicated group of individuals come together with a goal in mind. Last week, that goal was the growth and development of the Glass Association of North America (GANA), which hosted its Annual Conference March 2-5 at the Hyatt Regency Indian Wells in Indian Wells, Calif. 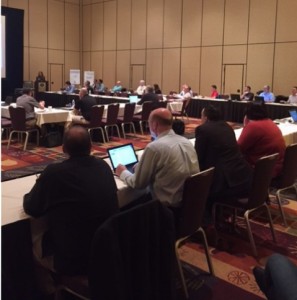 Through the GANA Annual Conference, attendees took part in a number of technical meetings as well as networking and social activities.

As part of the membership meeting, Bill Yanek, GANA executive vice president, provided an update on some of the recent changes and developments within the group. He noted some “divisional changes in command” and recognized Gus Trupiano with AGC Glass Co. as the new Building Envelope Contractors (BEC) chair.

While networking and advocacy make up a big part of GANA, so does its dedicated technical efforts. “There is value in these meetings and being a part of GANA,” he told USGNN.com™.

The CPSC has also issued an Advance Notice of Proposed Rulemaking for slippery floor materials, which includes glass floors and possibly stairs. If this goes forward, it could require labeling of floor material to show the coefficient of friction (slip resistance) to help prevent the elderly from falling on slippery floors. If the rulemaking goes through, this is something that could impact the glass industry, Mann said.

She also provided updates on a number of activities within ASTM. Working groups under ASTM C14 on Glass and Glass Products are focused on areas such as developing a new practice for cleaning architectural flat glass as well as a new test method for bird collision deterrence material. Under ASTM E 06 on Performance of Buildings a working group is developing a new test method for standard specification for human impact and fall-through resistance of unit skylights and related products used on skylight openings. Also under E 06, a group is working on a new guide for structural use of glass in buildings.

GANA will next meet August 23-26 when its Fall Conference takes place in Kansas City, Mo.