Trey Barrineau contributed to this report.

Machinery was once against a major focus on the Fensterbau Frontale, the four day biennial international trade show which concluded Saturday in Nuremburg, Germany. Companies new to the event found lots of success, while returning industry players drew plenty of interest in new products they’ve recently brought to the market.

Mecal displayed two new machines: a five-axis saw and its five-axis geo system. “We are really going after the U.S. market with that system [Geos],” said Tim Minne, director, commercial products. Geos can also be used in the commercial market to perform all the angle cuts for curtainwall.

Mecal has only been serving the U.S. market since May 2015 but has found great success. We’ve already revised our 2016 sales goals as we would already hit them by April,” said Minne. 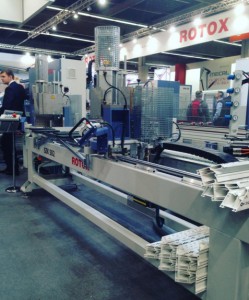 Rotox’s large booth had plenty of products, including a CNC milling and drilling machine. Kasto showed off its machinery line, which includes the KASTObbs block bandsaw, the Unicompact storage system and the Unitower for bar stock storage.

Elumatec introduced its new SBZ 122 family of models for all profile machining applications which require three- or four-axis centers. The machines feature a modular design that the company said will make it easy to adapt for various different needs.

“The traffic is extreme,” said Zaynip Temiz of Elumatec on the second day. “On the first day we had over 130 leads, but today I’d guess it’s double.”

GED exhibited for the first time with its RC2000 robotic cleaner. “I’ve had people from all over coming to look at this whether they are making windows or not,” said Joe Shaheen, director, sales and marketing for GED Integrated Solutions. “There is a big interest factor.”

Emmegi showcased Integra, a full PVC line from welding to corner cleaning. All processes are controlled by the software, and the line can even be used to clean a curved profile. The company reports the machines are installed in various plants in Canada, and the U.S. as well.  The machinery supplier also offered equipment for aluminum processing, and showcased Satellite, which is “the biggest machine we have.”

Another interesting product was Glassline’s canopy system. It’s a solid sheet of thick glass that can be installed easily over entrances and patios, said Bastian Terkowsky.

SIKA’s large booth featured the full range of its adhesives, including the new SikaForce-7900, a new two-component high-performance polyurethane-based adhesive. According to the company, it was designed for use on untreated, powder-coated or anodized aluminum frame and sash profiles.

Edgetech, Quanex’s European division, reported that its SuperSpacer Premium and SuperSpacer TriSeal for insulating glass units have been certified for use in arctic climates by the Passive House Institute.

Also in insulating glass, Roll Tech, an Alu Pro affiliate, presented its Chromatech warm-edge spacer. It also showcased a new product–Multitech, a spacer bar made from fiberglass that the company’s Thorsten Menzel says offers the best thermal performance on the market.

Profine showcased its 88 mm system, an extension of its 76 mm system that continues to be offered in the U.S. “We are trying to get people to understand the importance and benefits of a tilt and turn window,” says Gareth Parton, vice president sales and marketing, profiles division.

It seems many are starting to get it, according to Profine’s Robert Thiroff, chief sales officer. “In North America, they are embracing Europe,” he says.

David Harris, American Renolit product manager North America, affirmed what many had been saying, that there was a high caliber of U.S. attendees at the event. The company showcased its EXOFOL which is ideal for the variety of U.S climates. “Our film outperforms PVC film dramatically,” he said. “Overall, lamination is gaining in acceptance.”

He said global shows like this one is a great opportunity for its employees from all over the world to gather and share trends with one another.

Hornschuch also showed off its exterior laminates for window profile wrapping. The big news here was the launch of a third metallic design to its range of color options.

“In the U.S. this would be of particular interest to those working in commercial applications,” said Marco Patermann. “The metallic series allows U.S residential companies to enter the commercial market.”

Stay tuned to USGNN.com™ later this week for our March newscast from Fensterbau.