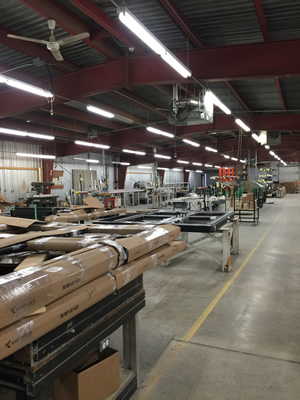 Glass 8 recently secured a 14,000-square-foot facility, where it will manufacture and distribute curtainwall and other glazing products.

There’s a new glazing player in the Western Canada market.

Recently formed Glass 8 Inc., a manufacturer, installer and consultant of curtainwall and glazing solutions, acquired a 14,000-square-foot fabrication facility in Winnipeg, Manitoba, and has hit the ground running.

The facility previously operated as Allan’s Glass & Aluminum and is centrally located in the country—something Glass 8 co-founder Dean Borys says is important.

“We opted for a more hub-and-spoke system rather than maintaining various facilities,” says Borys, who serves as the company’s director of pre-construction.

Glass 8 was established in late 2015 by Borys and Michael Hockham, the company’s director of operations. The two previously worked together at Canadian manufacturer All Weather Windows.

“During that time, we found that we had completely different skill sets, but that they worked extremely well together,” says Hockham. “And then Glass 8 was born.”

Borys previously owned the company Allan’s Glass, which he sold to All Weather Windows in 2011. All Weather Windows later brought on Borys and Hockham to serve the commercial market but recently decided to leave that sector in Winnipeg—opening up an opportunity for Glass 8.

“Late last year, I came to the realization that I’m more entrepreneurial than corporate,” says Borys.

The facility purchase included ready-to-go manufacturing equipment, such as general curtainwall processing and CNC machinery. Glass 8 is already onsite for multiple projects, as it took on jobs that had been contracted to Allan’s Glass & Aluminum.

The business is serving the provinces of Manitoba, Saskatchewan and Alberta—where it has additional offices—as well as parts of British Columbia. “The markets differ province-by-province,” says Borys. Alberta, for example, is seeing a boom in educational construction. According to CBC Alberta, the government announced 197 new construction and modernization projects in the sector between April 2013 and December 2014.

Glass 8 currently has 18 employees, with an eight-person installation team in Winnipeg and various subcontractor connections in other markets. It can produce and install curtainwall, storefronts and skylights, and has capabilities for glass railings and canopies. Hockham says Glass 8 is aggressively pursuing interior glass work.

“Being a small business, we’re agile enough to help our clients on smaller projects,” adds Borys, “but we’re also executing projects in excess of $2 million.”

Additionally, the company is rolling out a new interior partition product—a demountable, portable dual-glazed system called “Switch,” which it plans to introduce across Canada. Glass 8 is waiting for the product to arrive from Europe and is constructing a showroom at the Winnipeg facility to showcase it.