Cleer Vision Tempered Glass (CVTG) is focused on quantity. And in order to keep the numbers going up, it needed more room to work.

The Elkhart, Ind.-based fabricator is in the midst of a 28,000 square-foot expansion to be completed in August. The additional space, which will bring the company’s footprint to 65,000 square feet, will house its new automated insulating glass line, additional cutting capacity and serve as its primary loading and shipping area. 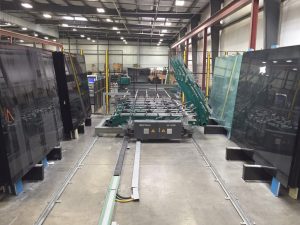 Cleer Vision Tempered Glass has steered away from custom fabrication and focuses instead on volume.

It is the company’s second expansion in three years. In 2013, it added 15,000 square feet of manufacturing space to house its silkscreen and CNC production.

The business was established in 2010 by Santelli Tempered Glass, which sold the operation to Cleer Vision in late 2011. The tempered glass side of the businesses (CVTG) focuses on commercial and residential, while it also services the specialty automotive industry through Cleer Vision Windows.

CVTG had approximately 15-20 employees when general manager Tim Widner joined in late 2012. It now has 52 employees, and Widner expects that could grow to approximately 70 after the facility is fully operational following the addition.

“This expansion is going to add a lot of space,” he says. “There’s a lot of opportunity to grow in it.”

Widner says over the last few years, the business has moved away from custom tempered work, as that segment was already being well-served. “We found our niche in volume,” he says. “That’s our specialty.” 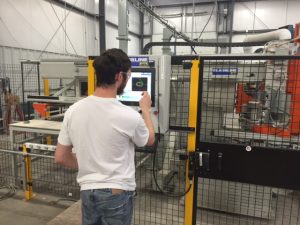 The company currently has more than 50 employees and expects the facility expansion will increase that number in the future.

This includes supplying for manufacturers of specialty doors and other systems used in commercial spaces such as restaurants and retail. This niche market, Widner says, calls for repetitive orders of similar sizes and makeups, which fits the company’s volume-based approach well.

The decorative and interior markets are something the company is eyeing for the future. But again, quantity will be the focus.

“We have two tables that can do this, and I believe it’s the first of its kind in North America,” says Widner. “We have lots of good things going on.”

Cleer Vision requested a multi-year tax abatement to cover the expansion and new equipment costs. According to The Elkhart Truth, “the project would add 11 to 15 jobs with an average starting wage exceeding $18 per hour, according to documents provided by the city. … Cleer Vision’s project calls for an investment of $830,000 in land and more than $2.2 million in machinery. The requested three-year tax abatement would save the company $110,000 while still paying the city $373,268 in taxes during the phase-in period.”