Seven endangered Kemp’s ridley sea turtles were re-released in the ocean in Florida after being rehabilitated at the PPG Aquarium of the Pittsburgh Zoo. Its Sea Turtle Second Chance program is funded partially by the PPG Conservation and Sustainability fund. 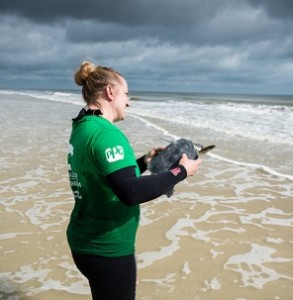 A volunteer from the Pittsburgh Zoo and PPG Aquarium releases a Kemp’s ridley sea turtle back into the ocean at Cape Canaveral, Fla.

The zoo’s veterinary staff and PPG Aquarium coordinator Josianne Romasco began treating 15 sea turtles in late December for various stages of hypothermia they caught in the Atlantic Ocean off the coast of New England. The remaining eight sea turtles are still at the PPG Aquarium and will be re-released within the next couple weeks.

So far, the Pittsburgh Zoo and PPG Aquarium has cared for and released one green turtle, 11 loggerhead sea turtles and 23 Kemp’s ridley turtles.

PPG also produces “turtle glass,” which has a Visible Light Transmittance (VLT) of 45 percent or less in the wavelengths associated with the visible spectrum (400 to 700 nanometers). According to a technical document by the company, “In undeveloped coastal environments hatchling sea turtles are guided to move toward the water by the light of the moon. In developed environments it is known that artificial lighting will confuse the hatchlings and cause them to travel away from the water where they will likely perish.”

It continues: “To improve the chances of hatchling survival, in March, 1993, the “Model Lighting Ordinance for Marine Turtle Protection” was adopted by the Department of National Resources in Florida and the regulation includes the 45 percent VLT requirement. In the time since, dozens of gulf state municipalities and local governments up the Atlantic seaboard have recognized the need to adopt or have already adopted the ‘turtle law,’ or similar legislation. Such regulations are aimed toward the protection of marine turtles from adverse impacts including artificial beach front lighting.”