Consolidated Glass Corp. announced it has expanded its Newcastle, Pa., facility with a new tempering oven. 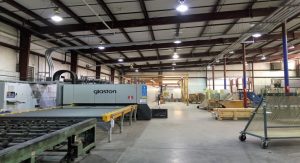 According to the company, the new Glaston RC200 oven—its second tempering line—has allowed it to increase overall tempering capacity to more than 250,000 square feet per month. Consolidated Glass also invested in an expansion to its packing warehouse, which increased that department by more than 10,000 square feet.

“2015 was a good year for Consolidated Glass,” says Louis Merryman, CEO and president. “We are seeing a lot of great things happening in our industry, including an overall increase in business levels year after year, which meant our capacity had to expand as well. Our customers are used to consistent five- to ten-day lead times, regardless of overall business levels. The only way for us to excel in this quick-turn environment was to make this substantial investment in our production capacity.”

This entry was posted in Today's News and tagged Consolidated Glass Corp.. Bookmark the permalink.