Construction Economy Continues Up, But Not Without Challenges

Is construction gaining or waning? That was the question industry economists addressed last week in a spring economic forecast webinar hosted by CMD Group.

In terms of the overall U.S. economy, American Institute of Architects (AIA) chief economist Kermit Baker­ said that despite a weak first quarter, gross domestic product gains are expected to be 1.5 to 2.5 percent for the next several quarters, helped by a strong jobs market. 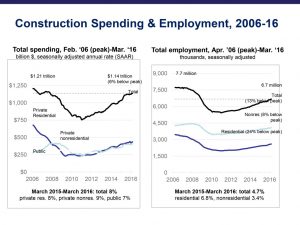 The construction industry has had a positive hand in the big picture. “The construction sector is back in growth mode and really one of the healthiest sectors in our economy overall,” Baker said.

However, he cautioned there are “a growing list of concerns.” The manufacturing sector has been weak and in a slowdown since last year, and a downturn on the international economic front is affecting U.S. imports.

Meanwhile, challenges in the construction recovery and expansion include a tight labor market in construction trades, volatility in building commodity prices and rising cost of capital.

Ken Simonson, chief economist for Associated General Contractors of America, said nearly all crafts are having trouble filling specialty positions. He added that the downturn in material costs from the last couple years is “probably over, but we won’t see a big upswing either this year or next year.”

The AIA’s Architectural Billings Index (ABI) has been generally positive the last three and a half years, showing more volatility in recent quarters. Growth trajectory has slowed in the last couple quarters.

Baker said AIA projects high single-digit growth in 2016, with office building stronger than that average. Next year, he said growth will be somewhat slower.

Simonson looked at construction spending over the last ten years, pointing out that almost five years of decline was followed by five years of growth.

Overall, according to AGC’s recent poll on its members’ expectation for 2016, 44 percent of respondents expect an increase in dollar volume of projects in 2016 compared to the previous year.

Education construction has rebounded after a decline, showing a 13-percent increase through the first quarter of 2016. He expects long-term growth, however, will be “fairly subdued.”

In 2016, Simonson projects overall construction spending will be just short of the 11-percent growth from last year.

Alex Carrick chief economist at CMD iSqFt, added that hotel and motel construction has been strong and that this can be a versatile market. “If one owner decides it wants to make renovations or expansions, all of its competitors feel they have to do the same.”

“The first quarter [of 2016] was a bit weak, but it’s always difficult to gauge the strength of the market in the first quarter,” he said. Looking forward, though, he said the consensus is that multifamily construction levels “will slow down very dramatically in the near-term.”

He said nonresidential construction spending saw healthy growth in 2015 and continues to expand through the first quarter of 2016. Spending was 10.8 percent higher in the first quarter of this year compared to last. The commercial sector saw 13-percent growth, while institutional increased at an 8.4-percent clip.

“Commercial property values have seen strong growth, but not as strong as apartments,” Baker said. “… Current real valuations on the commercial side are about on par with the last cycle.”

He added that the country has seen a lot of variation in office vacancy rates depending on location. Downtown metropolitan locations in coastal areas appear to be preferred compared to more suburban markets. Most areas with low vacancy rates are in coastal regions.

On the residential side, he said he thinks multifamily construction will continue to outpace single-family, but that the two will start to converge more in terms of growth.