Heritage Glass Co. sold its assets to the newly established company EnviraGlass, which will continue to produce solar glass at the facility. EnviraGlass held a ceremony last Friday unveiling the plant’s new signage. The building is being leased to EnviraGlass by the Kingsport Economic Development Board and the city of Kingsport. 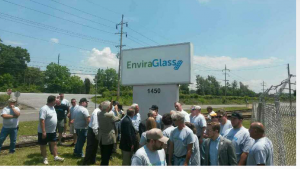 EnviraGlass, which purchased the assets of Heritage Glass, held a ceremony Friday.

Heritage purchased the facility’s assets from AGC North America in May of 2014, employing 125 people during full operation. However, it ran into financial issues within its first year and ceased production last August.

Taylor began discussions with the group in February, and the purchase was officially announced last week. Taylor says none of the prior investors in Heritage Glass have come along with the new company and that EnviraGlass is under “completely new management.” However, he says it hopes to retain at least 80 percent of Heritage Glass’ prior employees.

In the first production phase, EnviraGlass will employ 104 full-time personnel and nearly 30 contractors. The company will spend the next three months refurbishing the facility prior to restarting the glass furnace.

The plant had been partially operational since shutting down the furnace last summer, with former owners and employees continuing to temper, coat, package and ship previously manufactured glass.

“Without the efforts of Heritage Glass employees and board members, Vic Davis, Eric Kerney, Warren Strickler and Chris Cording, we wouldn’t be here today,” says Taylor. “The employees often continued to work amid difficult financial circumstances out of commitment to the century long tradition of glass making in Kingsport. We are deeply indebted to the employees who kept the lights on long enough to bring in a new partner.”

Taylor spent the last three months visiting solar panel manufacturers to secure more than 50 percent of its current capacity before restarting the furnace. The furnace will then again operate 24 hours a day, seven days a week, producing glass for sale by the first week of September.

“From 2015 to 2016, the number of solar panels installed in the U.S. more than doubled,” says Taylor. “…We think it is a growing market and that there are a lot of innovations that will keep it strong in the next four or five years.”

He says the plant is the only facility in the U.S. that manufactures low-iron solar glass, with the majority of its competition coming from China. In addition to logistical efficiencies as a domestic supplier, Taylor says a key value proposition for EnviraGlass is the high light transmission of its glass, which improves the output of the solar panels it’s used on.