What’s Old is New (and New is Old) at AIA 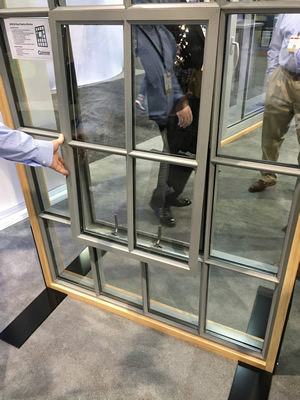 The AIA Show kicked off Thursday. Companies like Graham Architectural Products are showing off their newest offerings, such as this steel replica window–used in historic retrofits to mimic old factory windows.

The American Institute of Architects’ 2016 Convention kicked off Thursday in Philadelphia and is chock full of glass and fenestration exhibitors. Many companies on the show floor are showing off brand-new products, while others have brought back not-so-new products in fresh ways.

Pleotint is featuring its thermochromic glass called Suntuitive, which tints based on heat from the sun.

Pleotint marketing manager Patrick Lentz says the advantage of thermochromic over electrochromic is that it doesn’t need electricity and controls. However, the disadvantage of showcasing the product at a trade show is that it technically needs sun—something hard to come by inside.

So the company got creative this year and is giving out small samples of its glass, which attendees can dip into warm water to show how the glass tints depending on heat, as it would with the sun.

Pleotint also showed an example of Suntuitive in a triple-glazed unit. Lentz says triple glazing still isn’t big in the U.S. but makes up 30 percent of the Canadian market and much more than that in Europe.

One interesting product it is displaying is its steel replica window, which mimics the sightlines of old steel windows on factories and has an operable vent.

Additionally, Graham is showing its fixed offset window, which can be applied if an architect or building owner is looking to match a hung window for aesthetic purposes but doesn’t want the actual operability for safety, security or cost reasons.

“Every detail of the window is important,” says Lance Premeau, Kolbe’s product and market manager. He says this new sash lock option is an example of how Kolbe’s windows can be tailored to fit the aesthetics of the building.

Andersen is another door and window company demonstrating its latest offerings. The company is showcasing its large doors, some that span as tall as 10 and 11 feet high.

Andersen is using the trip to Philadelphia as an opportunity to support the nearby St. Christopher’s Hospital for Children. Visitors to its booth Thursday helped put together gift boxes filled with toys for patients of all ages. The company worked with the organization Cheeriodicals for the activity.

Comfort Line, which manufactures fiberglass commercial doors and windows, brought its storefront to market a little over a year ago and is discussing it at the AIA show. Regional sales manager Keith Kreiner says it introduced that product in response to demand for architects, and that it has been well received.

On the coatings side of things, a year after introducing its Nova product, Valspar is presenting its new Rustica line of colors.

According to the company, the “nature-inspired” palette “contains special effects pigments that create richer, more saturated colors with an antique aesthetic, including some with a subtle color shift.”

Stay tuned to USGNN.com™ for continued coverage of the AIA show, which continues through Saturday.