When officials at the College of William and Mary in historic Williamsburg, Va., decided it was time to update a group of early- to mid-1900s dormitories, they replaced crumbling, decades-old wood windows with low-maintenance aluminum models in the first building.

It would be the only one of those dorms to get aluminum replacement windows.

By the time the college started planning to gut the second dorm—Chandler Hall—its Art and architectural review board had stepped in and insisted the new windows look exactly like the originals—constructed in 1931 with curvy wood frames, true divided light and a respect for the Colonial architecture of the country’s second-oldest college. 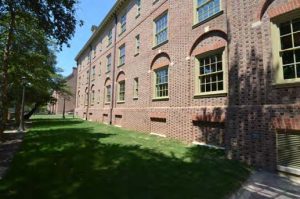 “The architectural fiber of our campus is very important to us,” Gilbert Stewart, project manager for the 322-year-old institution, says. “The old buildings are part of the Colonial Williamsburg experience.”

So Chandler Hall’s new windows feature molding profiles and sashes identical to the originals, and the same old-fashioned weight-and-pulley balance system that operated them.

The 2015 versions, however, were crafted from Accoya wood and insulating glass, which allowed for an authentic look while incorporating durability and energy efficiency.

Rowland says the search for a wood that held paint for the long term, resisted water, required little maintenance and would last at least as long as the original windows had whittled his choices to mahogany and Accoya wood. “It’s sacrilegious to paint mahogany,” he says, noting Accoya wood “fit the bill.”

Brooks Gentleman, owner of Re-View, the Kansas City, Mo.-based firm that fashioned the new windows, says the low thermal conductivity, water resistance and durability of Accoya rivals the best tropical hardwoods, making it likely that the Chandler Hall windows won’t need painting for at least 15 years or replacing for a century.

“The last thing you want to do is put a wood window in a historic building and have it rot out after 30 years,” says Gentleman, who says the window’s glass panes will need replacing long before their wood frames. “You want a window that’s going to last 100 years.”

Because the college’s architectural watchdogs also wanted a window that would look authentic, the project turned out to be a custom job.

Re-View, which specializes in historic window restoration and re-creation, sent a crew to Williamsburg to remove one of Chandler Hall’s originals and haul it back to Kansas City, where engineers dismantled it piece by piece and then reconstructed it using Accoya wood and other modern materials.

All told, the 41,000-square-foot sophomore dorm was empty and under construction for a year until it reopened for the Fall 2015 semester, Gilbert says.

Now, Gilbert says, “Outside, it looks like the old building. It looks like it did when we started.” That, he says, “is a dream-come-true for our Resident Life Department because we’ve been striving for a while to upgrade the dorms, stay in line with technology and make our buildings attractive so students will choose to come here. Campus life is incredibly important, and we want our dormitories to be a true home away from home.”

This entry was posted in Project of the Month and tagged Accoya, historical retrofit, retrofit. Bookmark the permalink.