Construction backlog among the nation’s largest contractors stands at more than 12 months, according to the Associated Builders and Contractors’ (ABC) Construction Backlog Indicator (CBI). ABC says this is the largest backlog the industry has seen in the $100 million-plus category since it established the indicator. 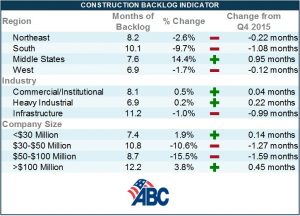 Nationally, ABC says the CBI inched down to 8.6 months during the first quarter of 2016, a 0.8-percent decline from 2015’s final quarter. However, CBI expanded by 2.7 percent on a year-over-year basis, which translates into an increase of more than 0.2 months.

“Contractors are no longer becoming busier, rather, the level of activity has stabilized at a reasonably high level,” says ABC chief economist Anirban Basu. “Most contractors continue to express satisfaction regarding the amount of work they have under contract. This is of course truer in certain parts of the nation than others.”

Basu adds that subcontractors are “much busier than they were several years ago, with general contractors reporting greater difficulty securing experienced contractors. Some construction firms are turning away work for the first time in years.”