When USGNN.com™ editor Nick St. Denis told me noted author Judith Dupré was coming out with the book “One World Trade Center: Biography of the Building,” I couldn’t wait to read it. It was being sent to our offices to his attention, but I begged him to have it first. Why? Because for years, I lived and breathed this story, particularly the controversy surrounding the podium wall (more on that later). I couldn’t wait to devour every detail regarding this historic building—some of which I was fortunate to cover myself over the years. 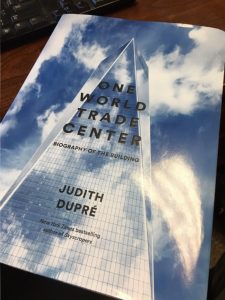 As a writer, I truly commend Dupré for her wonderful work—from the first paragraph, she draws you in:

“One World Trade Center, the tallest building in the Western Hemisphere, is the most advanced skyscraper ever constructed. A structural and political tour de force, it is the triumphant result of many demands, hopes, and visions that came together, improbably and at great cost. Now, as the new World Trade Center moves from a place of great debate to a great place, this book responds to the intense curiosity from around the globe about how this remarkable supertower was designed and built. The answers might surprise you and undoubtedly will inspire you.”

Being in the glass industry, there were many parts of the book that stood out to me. I loved reading about how the upper glass curtainwall was tested for blast-resistance in a New Mexico desert. Carl Galioto, SOM, watched the tests from .4 miles away and felt the ground shake, “yet the glass remained intact.”

Developing and installing the glass curtainwall was a huge feat for Benson Industries, which engineered, fabricated and installed the glass panels for One World Trade Center and Four World Trade Center. “They had to spend two years working out the logistics of crating, moving and lifting the window units,” Dupré says. Two years—just on logistics—it’s something many of us can barely wrap our heads around.

It also struck me that September 11 was not the death of the skyscraper, as she accounts in the book’s afterword. In fact, “more skyscrapers were built since 2001 than were built in the century preceding it.”

I have to admit it was a proud moment to see a few sentences from my 2009 article in the book then cited in her references (“Tara Taffera, “U.S. Suppliers Do the Design Work but Overseas Company Gets the Job for Portion of One World Trade Center,” USGlass News Network, March 31, 2009.”)

But some parts of this evolving story-within-a-story were left out. It was mentioned that the Chinese fabricator couldn’t produce the glass, so the prismatic glass design was scrapped, but it didn’t note that the architect could have gone back to fabricators who could have produced the prismatic glass. At one point SOM had re-opened those conversations, then abruptly closed them again.

In the afterword to the book, Dupré did a superb job addressing the sheer magnitude of One World Trade Center—not in terms of size but in what it represents. She alludes to the reserve of SOM, and to the fact that there is even more to this story.

“Beyond aesthetics, the building had to resolve a broad spectrum of structural, political, and financial issues, some of which still have not been made public. Much like their tower, which cloaks its audacity behind an elegant façade, the architects have chosen not to defend the building from its critics. That urbane reserve is a hallmark of Skidmore, Owings & Merrill, but more to the point, the architects don’t believe it needs defending. David Childs passionately believes in the inevitability of its design. He’s mum on the compromises that had to be made, several of which, one suspects were excruciating.”

Yes, there are more details that even this mammoth book didn’t delve into (at least regarding the glass), but does it matter? Would it necessarily change the story of this iconic building?

If you’re like me, and you have some knowledge of the project’s glass drama, it may be hard at first to let it go. But trust me, it’s worth it. Get lost in Dupré’s writing, the pages and pages of exquisite photos, and the fact that One World Trade Center is quite the testament: to what it takes to be in the construction industry, and what it takes to persevere.

(I would love to hear your thoughts on the book. Post a comment here or email me at ttaffera@glass.com)

This entry was posted in Today's News. Bookmark the permalink.