Local Flavor of GEPN a Big Plus for Area Glass Businesses 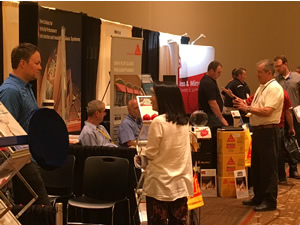 The Glass Expo™ Pacific Northwest (GEPN) show hasn’t been held in a decade, and industry members in the area were eager for its return.

GEPN ’16 has been held Thursday and Friday, with an extensive slate of educational seminars and trade show activity.

Peter Barnhart of Pacific Glass & Door, located in nearby Mukilto, Wash., said he is excited to finally have the event back in the area.

“It’s a lot easier to get to for a smaller shop like us, compared to the national shows farther away,” he said. “It’s a great opportunity to network, and to meet with all the vendors I speak with on the phone all the time but can never see in person.”

The event is co-sponsored by USGlass magazine, USGNN.com™ and the Washington Glass Association, of which Barnhart has been a member for years. “We’re a very close-knit industry here,” he said.

Tara Brummet of Vitrum said GEPN is the first trade show at which her company has exhibited. The glass fabricator is located in British Columbia, Canada, and the closeness was a key factor in its decision to showcase its offerings to the area’s glass community.

“It’s been great,” Brummet said. “I’ve basically already seen all of my customers in the first day.”

Many other exhibitors, such as Hartung, located in the Seattle area, were also able to take advantage of the regional aspect of the show. Rich Porayko of Hartung said business leads could be more meaningful in this type of event because of proximity.

The Pacific Northwest region is known for its hand in art and decorative glass. Many industry members from this segment were at the show, including Kris Iverson of Moon Shadow Glass and Rich Lamothe of Glass Strategies, both located in Oregon. Both work on high-end decorative projects throughout the country, and the two have collaborated on a handful of projects in recent years.

Industry veteran Mic Patterson, who gave a presentation Friday morning, said he is in a transition period in his career. He announced he is now no longer an employee of Enclos, though he will continue to collaborate with the façade engineering and curtainwall design company.

Moving forward, he’ll be putting his full energy into Façade Tectonics, which he co-founded and where he serves as president. Façade Tectonics held its first event in 2007 as a round-table meeting and has since held 14, with recent conferences hosting at least 200 people. It established itself as an institute last year, which will allow it to fund broad-based research in building façade technology.

“We’ve been negligent as an industry in investing in R&D,” he said. “So this is about bridging this fragmented industry in which we’re working.”