The Chinese industry has increased its adoption of polyurethane thermal barrier technology over the last decade and a half, and one U.S.-based company is helping ensure the sector has a reliable standard to correspond with it. 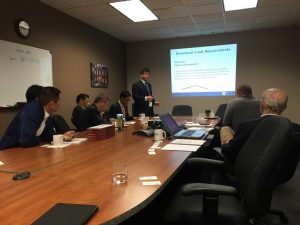 Azon International, based in Kalamazoo, Mich., has been working with the Chinese National Standards Committee since the early 2000s when it ramped up the marketing and selling of its polyurethane thermal barrier products in the region. At the time, the company helped the group of industry members and government officials write the first standard, which was released in 2004.

The committee visited with Azon in 2006 to work on the standard’s first revision, and it returned this May to discuss a new one, planned to take effect later this year. Last month, eight members of the committee, including employees of polyurethane suppliers, testing facilities and government officials, spent nearly a week with Azon’s Jerry Schwabauer and Patrick Muessig.

“Our objective is to help the Chinese develop good standards and govern the manufacturing and installation of polyurethane thermal barrier windows,” says Schwabauer. “They are very anxious to learn how we do things and why we do things.” 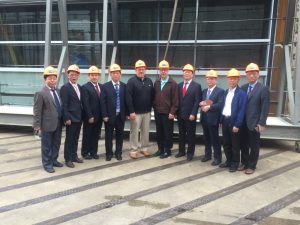 The group spent nearly a week together and visited AAMA and Intertek in addition to Azon’s facility.

The group started with a tour of Azon’s Kalamazoo facility, observing how its products are manufactured and tested in house, as well as its quality control practices. It then spent a day with the American Architectural Manufacturers Association (AAMA) in Chicago to discuss standards and other documents pertaining to polyurethane thermal barrier technology. The last main visit was to Intertek in York, Pa., where they saw how units are tested for things like thermal performance and strength.

Schwabauer says the group of Chinese standard developers always comes with good questions and gets a lot out of the meetings. “We’re just trying to make sure everything they do is based on sound science, and we’re able to help with that having years of successful installations and testing.”

He adds that the visit really reinforced the fact that the U.S. industry is “really good at what we do” due to the collaboration across various parts of the sector. “We’re constantly working with other manufacturers, testing labs and association members,” he says. “And that’s why our standards are so good.”

A key challenge in Chinese code development, Schwabauer says, is that it takes input from the European CEN standard in addition to AAMA. “We’re really promoting the North American standard, because that’s what we have the most experience with.”

Azon became active in the Chinese market in the early 1990s. It started by exporting its chemicals and machinery there before eventually opening a manufacturing facility in Shanghai. It also has sales offices in three locations in the country, as well as Korea and Europe. “We’re really committed over there,” says Schwabauer.