USGlass magazine was nominated in three categories in the American Society of Business Publication Editors’ (ASBPE) awards. The nominations were announced Tuesday and USGlass will now compete in the regional awards in the competitive Mid-Atlantic region.

“It was an honor to have the efforts of our editorial and design teams recognized again this year,” says Debra Levy, publisher of USGlass. 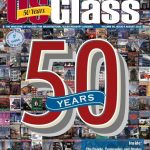 The cover of the USGlass August anniversary issue was nominated in the category of Design: Front Cover-Special Issue or Supplement. Art directors Dawn Campbell and Saundra Hutchison both spent countless hours on this special commemorative cover.

USGlass editor Ellen Rogers was nominated for two articles in the technical article category: The X Factor; and Skinny Dipping.

“We are so proud of all our nominees,” says Tara Taffera, editorial director. “It’s great to see us be recognized in all venues—print, writing, design and video.”