The architectural goal for the recently completed Dwight D. Eisenhower Airport parking structure and rental car facility project was to fit in with the rest of the airport’s buildings. A large application of metal composite at the Wichita, Kan.-based airport helped achieve that. 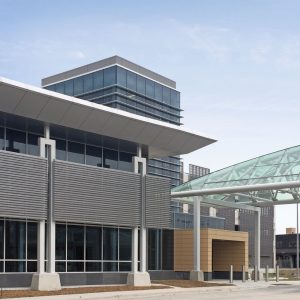 The system is a metal composite material designed for exterior use, made by bonding two sheets of aluminum to a thermoset phenolic resin core. The vertical walls were Pewter and the soffits and angled fascia were silver metallic. Citadel’s rainscreen attachment system was employed for this project.

Construction began in June 2013 and wrapped up May 2015. The purpose of the design was to match the airport’s existing structures as well as the new aviation-themed terminal that opened around the same time, according to Sam Frey, senior vice president of Schaeffer, Johnson, Cox, Frey Architects in Wichita, Kan. 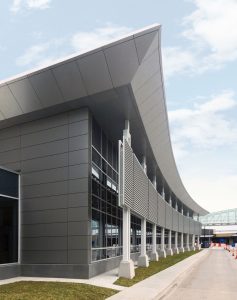 “We were context sensitive,” Frey says. “We were interested in keeping a consistent look at the airport. … We appreciate the inherent qualities of metal; it’s thin, lightweight, economical and malleable. We also liked the way it coexisted with the perforated panels around the perimeter of the building.”

Kruse Corp.’s Jarod Pauly, architectural superintendent, says the installation challenge came on the curved “eyebrow” of the building, where the soffits transitioned into a curved, angled-out fascia. “The framing we had to work with was longer on one end, so we had to extend all the panels to the same length, using shims and sub-girts where framing was short.”

Frey says the curved design element was intended to match the look of adjacent buildings as well as reflect the feel of aviation. “The malleability of the Citadel panels allowed us to achieve the look we sought,” Frey says. 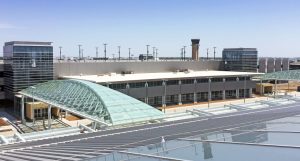 A large steel and glass canopy extends over a crosswalk connecting the garage and the new terminal building. Uncovered exterior ramps in the parking garage feature a heating system under the pavement to keep it from freezing and ice from forming.