Glasstec, a Window to the Worldwide Industry

The global glass industry is in a good place, as evidenced by its largest trade show that wrapped up at the end of last week in Dusseldorf, Germany.

glasstec director Birgit Horn says exhibitors at the show rented 375,000 additional square feet of space compared to 2014, with the average booth size up from last time.

Forel SpA, for example, featured its largest stand size ever, and Hegla, Bystronic and Lisec dominated their respective halls from a footprint perspective. Other companies stood out with enhanced displays. Guardian featured a large, elaborate two-story stand that showcased a variety of its offerings and technologies, including a near-20-foot-high curved glass façade.

“That shows exhibitors are investing in their presence here,” says Horn. 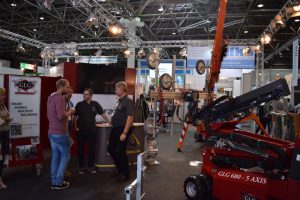 Exhibitors came from 52 different countries. GLG is based in Canada.

The trade fair also saw an increase of exhibitors, with companies such as NSG Group returning after a several-year absence. The floor totaled 1,235 exhibitors from 52 nations and upwards of 40,200 attendees from more than 100 countries.

“Everyone in the world who deals with glass is here,” says Horn.

Christian Leschiutta, sales director of Intermac, says his company had more than 1,000 people from 50 countries visit its stand, with large participation from the U.S., Eastern Europe and Oceania. “Visitors were focused and well-prepared, an indicator that the industry is growing and developing,” he says.

According to a survey conducted by organizers during the event, more than 40 percent of attendees said they had concrete intentions to invest at the show.

“We haven’t seen the boom just yet, but it’s picking up,” says Horn. “You can get an idea of what will happen in the next two years.” Horn adds that the U.S. market is playing a very important role in the industry’s well-being. “It’s one of the best developed at the moment.”

USGNN.com™ and USGlass magazine covered the show extensively. In case you missed any of it, here’s day-to-day coverage, both in print and on video:

READ: Exhibitors Gearing Up at glasstec

WATCH: The Glassy Side of glasstec

WATCH: Spotlight on the Latest Machinery and Equipment