California Company Aims to Take BIPV to Next Level

Transparency may be the most important characteristic of a window. So when a technology is being introduced to the glass and glazing industry, it’s important for those developing it to keep that mind.

A group of engineers based in Santa Barbara, Calif., has taken that to heart in forming the startup company Next Energy Technologies, which has developed an energy-producing coating system for insulating glass units (IGU) that it says is an enhancement of other building-integrated photovoltaic technologies for multiple reasons—namely transparency. 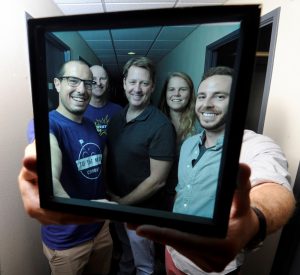 Next has been in discussions with multiple glass and window fabricators on potential licensing deals and has made a presence at a handful of industry events this year. It exhibited at GlassCon Global, joined the Insulating Glass Manufacturers Alliance (IGMA), presented at IGMA’s summer conference and will present during GlassBuild this week.

In speaking with fabricators about the photovoltaic technology, co-founder and chief technology officer Dr. Corey Hoven says they seem to care most about aesthetics first. “Their perception is, ‘Why haven’t these technologies had the impact that they could?’” he says. “It’s because they just haven’t looked like a normal window.”

Danny Seigle, vice president of business development, agrees. “The biggest feedback we’ve received is regarding the aesthetics,” he says. “If you look at our colors, transmission and how little haze we have, we’re the first to really have those aesthetics. That goes even outside of fabricators. When we show architects, it’s the same thing.”

Next has taken a proactive approach in getting involved with the industry. Aside from reaching out to potential customers to pitch its product, it has participated in industry events not only to promote its technology and make connections, but to learn more about the sector that it hopes to be a part of for the long haul.

The insulating glass segment is of particular interest to Next, as Seigle points out that the IGU serves as the “encapsulation device” that is required with photovoltaics. This, he says, is another reason the product can be cost-effective.

Next’s coating technology is the same type of dye coating traditionally used for photography film. It is applied on surface No. 2 using specialized coating heads integrated in a fabrication line—after the glass is cut, tempered and washed and before it is encapsulated in the IGU process.

That’s the commercial application, but the company is also exploring a residential application in which the energy-generating glass is used to power operable “smart windows” to reduce or eliminate the need for hard-wiring.

Next has been talking with glaziers about the technology’s potential, mainly with contractors that have previously implemented dynamic glass into their projects. “Much of the electrical aspect is the same as electrochromic,” says Seigle. “We’ve leveraged a lot of the standard working techniques that have been used already.”

Ultimately, Next is working with fabricators on negotiations of advanced licensing deals and hopes partnerships will form soon. When that happens, the company feels confident the demand from the end user is waiting. One factor that often holds back the adoption of new technologies is the reluctance of the building owner or architect to want to be the “guinea pig” of the application. Next asserts that this is not the case with its product.

“Our largest investors come from the real estate arena, reflecting the desire for this in their market,” says Hoven. “So you’re going from, ‘Hey, we’ll be early adopters’ to ‘Hey, we’ll invest in R&D.’”

Seigle says the technology will help the glass industry in the window-to-wall ratio battle, especially given the drive for net zero buildings and the implications of that market.

“The way we think of ourselves as a market-enabling technology,” he says. “We make glass more valuable. Now we can have a larger surface area of glass, glaziers have more to install, fabricators have more glass to produce… and owners can get more value out of glass.”