S. Albert Glass Co. had at least ten trucks on site in Downtown Washington D.C. after rioters smashed dozens of windows of businesses near Franklin Square. 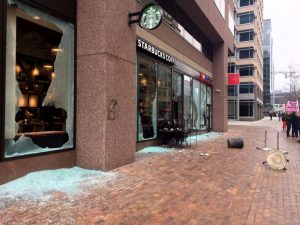 Businesses targeted in the glass-smashing riots included McDonald’s, Starbucks and Bank of America.

S. Albert Glass Co. began preparing last Thursday for what could potentially be a busy day Friday in Washington, D.C.

It ended up being the right thing to do.

The Beltsville, Md.-based glazier dispatched at least ten trucks to downtown D.C. Friday after a group of rioters during President Donald Trump’s inauguration smashed out dozens of windows, storefront glazing and other glass structures near Franklin Square, approximately a mile from the National Mall.

Businesses that were targeted included McDonald’s, Starbucks and Bank of America. S. Albert was called on by the buildings’ management to secure and board up the openings, which totaled nearly 40 windows in that immediate area alone.

“We really took up that entire quadrant from 12th Street to 13th Street, I Street and K Street down to New York Avenue,” says S. Albert president Michael Albert. 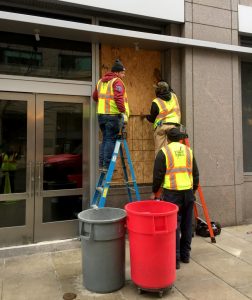 S. Albert had 18 employees onsite with the two box trucks full of materials.

The company was well-equipped to handle the work having done similar repair-and-replace jobs during past riots and protests, including those in Baltimore, in 2015. Still, it was an eye-opening experience. After getting through security, Albert had to lead his trucks through the crowds to get to the damage—where the chaos continued.

“There were helicopters flying overhead, the national guard in front of us separating us from the protesters, flash bombs going off and sirens nonstop into the evening,” says Albert. “We were right there when they set the limo on fire.”

S. Albert initially had one box truck stocked with materials at the scene but brought in a second as things escalated. The company had 18 employees onsite with the two box trucks full of plywood, two-by-fours, security film and other materials.

“We set up a central location and were able to do everything from there,” says Albert. 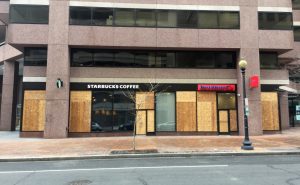 S. Albert cleaned up the area, boarded up the properties and took down glass sizes and makeups Friday, finally leaving at approximately 10:30-11 p.m. Saturday Sunday, it returned to re-check measurements and write up the orders.

Some of the glass was able to be replaced within a couple days, but most of it was tempered and insulating, so it had to be ordered. S. Albert is working with its suppliers to expedite the orders.