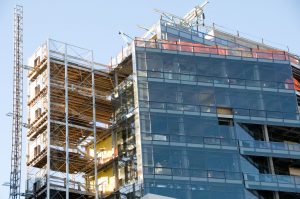 Overall construction employment increased 1.5 percent for the year with a 102,000-job increase, though the industry lost 3,000 jobs on a monthly basis. According to industry economists from the Associated General Contractors of America and Associated Builders and Contractors, the lackluster numbers may be indicative of a skilled worker shortage rather than a lack of work, as November’s construction spending marked a ten-year high.

Construction spending for office buildings rose 2 percent from October to November and 27.5 percent year-over-year (to $76.2 billion), the Bureau reports. Lodging construction is also up big over the year, increasing 28.4 percent to $29 billion. It increased month-over-month by a 6.9-percent margin.

The educational sector increased spending by 9.1 percent (to $92.4 billion) from the same time last year and 2.5 percent from the prior month. Healthcare buildings continue to lag, with a 1.5-percent decrease in construction from last November (to $41.8 billion) and a 0.1-percent dip from October 2016.

New multifamily construction dipped 2.7 percent for the month but was 10.7 percent higher than in November 2015 (to $61.9 billion).