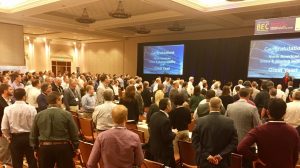 Julia Schimmelpenningh had everyone stand during her presentation at the BEC Conference Tuesday, congratulating the audience on the industry’s success in 2016 and its prospects in 2017.

Attendees of the Glass Association of North America’s (GANA) Building Envelope Contractors (BEC) Conference were treated to a wide variety of industry-focused presentations Tuesday at Caesars Palace in Las Vegas.

Julia Schimmelpenningh of Eastman followed Stanley Yee’s (Dow Corning) GANA President’s Report with a “State of the Industry” presentation primarily focused on laminated glass. She gave a history on the evolution of laminated glass and a breakdown on trending applications of the product, including safety, storms, structural, security and acoustical.

“From a safety perspective, glass is changing,” she said. “It’s being demanded as more than a just cut-resistance material, but for impact resistance and shard retention as well. … The key with laminated glass is that by itself, without any other function (such as tempering), it is considered safety glazing.”

Schimmelpenningh said acoustical glazing has become a key area of interest. “It’s a comfort issue … and it is conducive to healing, talking, learning and hearing,” she said. “So it is ideal for places like schools, hospitals and hotels.”

She added, “The thing with sound is once you build the building, you don’t know what’s going to happen around it. So you might as well think about [sound] ahead of time.”

According to Schimmelpenningh, there were fewer than 300 laminating glass fabrication locations worldwide in 2002, but nearly 800 locations are projected to be in existence around the globe in 2017.

Christopher Zmijewski of Haag 3D Solutions and Shaun Patchell of L.F. Driscoll followed Schimmelpenningh with a discussion on 3D documentation and virtual construction.

“When I first started, [3D devices] were large, bulky instruments,” said Zmijewski. “… The industry has changed so much. The instruments are smaller, faster and more economical.”

He said the “3D industry is exploding” as sensors get smaller “and we can put them into smaller, more accessible instruments.”

“Glazing is certainly considered a part of the energy scheme and plan of buildings,” said Gary. “… Glaziers have an evolving role. Energy performance is making it harder to define the glazier’s true ‘work’ in subcontracts.”

He added, “Uncertainty creates a danger for us.”

Johnson said “flow-through clauses” are becoming more prevalent and “everyone is trying to push responsibility down” the chain of project members—from the owner, to the general contractor to the subcontractors. He also touched on “paid when paid” and “paid if paid” conditions in contracts, giving advice on how to approach or avoid them.

Israel Berger of Vidaris discussed glass compliance and durability, focused on the contractual compliance to which glaziers must adhere. He called on the industry to strive for an insulating glass unit (IGU) warranty longer than ten years, and showed examples of a variety of IGU failures.

“Our studio really focuses on undertaking the formative aspects of the project and overlaying that with the aesthetics,” he said. “… Functionality is always the underlying factor.”