“Those of you who think regulation is going to disappear [under President Trump]–it ain’t gonna happen.” That was the message from Dr. Jim Doti, president at Chapman University, who presented the economic forecast at the meeting of the American Architectural Manufacturers Association, which took place this week in Phoenix. “There may be simplification, but no outright elimination.” 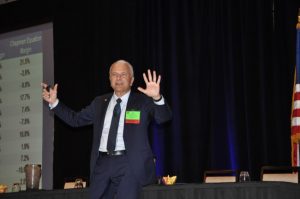 He also discussed the possible impact of “Trumpenomics,” which he said “will most likely increase the Federal Funds rate.”

Other predictions include a slight drop in growth in the real GDP, but “nothing significant,” said Doti. He added that the Federal Reserve could start increasing rates, but then put some fears to rest. “It takes a while for a recession to happen once rates have been increased.”

“This recovery will be the third-longest recovery in the history of the U.S,” said Doti.

In concluding his presentation, Doti told attendees if there was just one takeaway, it would be this: “Be more mindful of the spread in interest rates rather than the low.”

JoAnn Dankert of the National Safety Council gave a timely presentation on safety in the workplace—and what not to do.

She put it simply before delving into her top-five don’ts. “If we give employees the right training, we will find success,” she said.

1-Believing “safety is a cost of doing business.” You need leadership and management commitment to foster safety in the workplace so that this attitude doesn’t take over.

2-Being reactive vs. proactive. Implement corrective/preventative action. “Oftentimes, people have that ‘I care’ piece because someone died or was critically injured,” said Dankert. “But it needs to start before that. Employees know if you care or not. The leader has to care.”

4-Lacking effective safety communication. Dankert said that you can’t be afraid to say to someone, “Hey man, don’t do that.”

5-Not following up/through on safety processes. If you don’t follow through, for whatever reason, this sends a bad message to employees. “People look at your follow-through to see if you are serious about safety,” she said.