Construction sectors that use lots of glass, including office and commercial buildings, saw double-digit increases in 2016, according to USGNN.com™’s examination of Bureau of Economic Analysis data released this week. This was followed by a positive January construction employment report—in terms of glazing-related fields—from the Bureau of Labor Statistics. 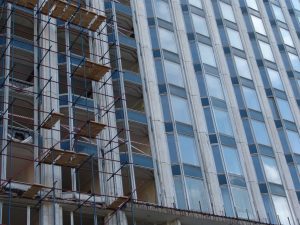 While nonresidential construction increased 4.6 percent for the year on a seasonally adjusted, annualized basis, it was lifted by a 31-percent increase in the office segment, which totaled $75.8 billion in value put in place. This parallels optimism within the glass industry, as contract glaziers report in USGlass magazine’s 2017 Glass and Glazing Industry Outlook (to be released next week) that office building was the most robust sector for the industry in 2016 and will continue to strengthen this year.

On a monthly basis, office construction ticked up 1 percent, while commercial was up 0.6 percent. Healthcare construction also increased 0.6 percent for the month, while educational building fell 2.1 percent.

The transportation sector saw decreases of 6.5 and 1.4 percent yearly and monthly, respectively, while amusement and recreation construction was up 13 percent for the year but down .3 percent for the month.

This entry was posted in Featured News, Today's News and tagged Construction, employment, glass and glazing, glaziers. Bookmark the permalink.