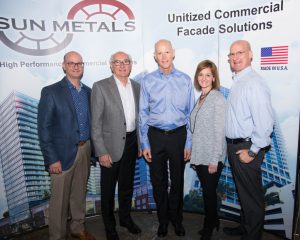 Last week, Florida Gov. Rick Scott announced his “Fighting for Florida’s Future” initiative, focused primarily on business and job growth. He looked to a company in the glass and glazing industry as an example.

On Wednesday, Scott visited the 100,000-square-foot facility of Tampa-based Sun Metal Systems, a manufacturer of commercial glazing systems, including curtainwall and architectural windows.

“The visit tied into the promotion of his plan to bring jobs and manufacturing back into the state—he thought we were a good representation of that,” says Sun Metals vice president and general manager Matthew Price.

The company currently has 80 full-time employees and hopes to add to that total. “We’re growing, and we want to continue to grow over the next several years and into the foreseeable future,” adds Price.

Scott and his staff met with company ownership and did a brief tour of the facility. “I don’t think he was very familiar with unitized curtainwall systems, so he learned about that,” says Price. Scott then gave a brief speech to the media, discussing his new budget plan, which proposes $618 million in tax cuts “to help Florida families and small businesses,” according to a release from his office. “The Governor’s recommended budget also invests record funding in Florida’s education system, strengthens environmental protection efforts, supports law enforcement and fights for Florida’s growing job market.”

Price says that while people often associate Florida with tourism, it is actually a prime environment for manufacturing.

“We’re blessed to be in a location with 12 months out of the year that lend themselves to manufacturing,” he says. “We don’t have to shut down operations due to snow or cold winter weather, nor do we have the high energy bills that come with it. … Obviously in Florida we periodically deal with hurricanes and storms, but being in Tampa, we’re in a good geographical location in terms of that as well.”

“We pride ourselves in what we do, especially in today’s very competitive market,” says Price. “There are not a lot of high performance unitized façade manufacturers around, and a lot of our competition goes overseas. One thing we stress is that we are a made-in-the-USA company. We try to do things the right way and partner with good, solid U.S. companies.”

Price says Scott took time to take photos with all of the company’s employees during his visit, noting that it was not only a great experience for them, but a positive for the industry as a whole.

“Our governor is very business-friendly, as he is an entrepreneur himself,” says Price. “It’s not often we in our industry get recognized for what we do by our elected officials, so we are proud of that.”