What’s New with the Codes?

The glass and glazing industry continues its battle to maintain—and expand—its presence on the wall through the various national and international building codes and standards. Tom Culp of Birch Point Consulting is at the forefront of the industry’s efforts, and earlier this month at the Glass Association of North America’s Building Envelope Contractors (BEC) Conference in Las Vegas, he gave an update on new requirements and guidelines recently put in place. 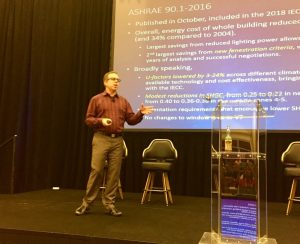 The new “Energy Efficiency Standard for Buildings Except Low-Rise Residential Buildings” was published in October and is included in the 2018 International Energy Conservation Code (IECC).

Broadly speaking, he said U-factors in the new standard were lowered from 3 to 24 percent across different climate zones based on available technology and cost effectiveness, “bringing them more in line with the IECC.”

Other changes include modest reductions in solar heat gain coefficient (SHGC)—from 0.25 to 0.22 in the new climate zone 0, and from 0.40 to 0.36-0.38 in the middle zones 4-5—as well as orientation requirements that encourage lower SHGC or shading on the west.

According to Culp, the new energy code went through “an intensive 15-month process” in which the hundreds of proposals were considered involving two public hearings, negotiations and online voting by code officials.

“Overall, we did very well,” Culp said in the interest of the Glass Industry Code Committee (GICC). He said five of six proposals from the GICC were approved, and 96 percent of proposals the GICC opposed were stopped.

“Forty to 45 percent of all proposals we actively supported were approved,” he said. “This was a better success rate than most, especially with the online voters disapproving 80 to 90 percent of proposals.”

According to his presentation, code changes include:

Culp added that in the new code, the IECC didn’t accept the updated climate zone maps from ASHRAE. “This could create confusion in many locations,” he said. “For example, a city can be in zone 4 for IECC and zone 3 for ASHRAE. This will hopefully be cleaned up in local adoption process.”

IECC also didn’t accept a proposal requiring either a whole building air leakage test or air barrier commissioning, which is in ASHRAE 90.1-2016.

Culp said the 2018 IBC was updated to reflect ASCE 7-16 “ASCE Minimum Design Loads and Associated Criteria for Buildings and Other Structures,” which increased design loads for skylights and sloped glazing, as well as risk category-four buildings.

Culp added that the new IBC did not update to the 2016 accessibility standard (ANSI/ICC A117).