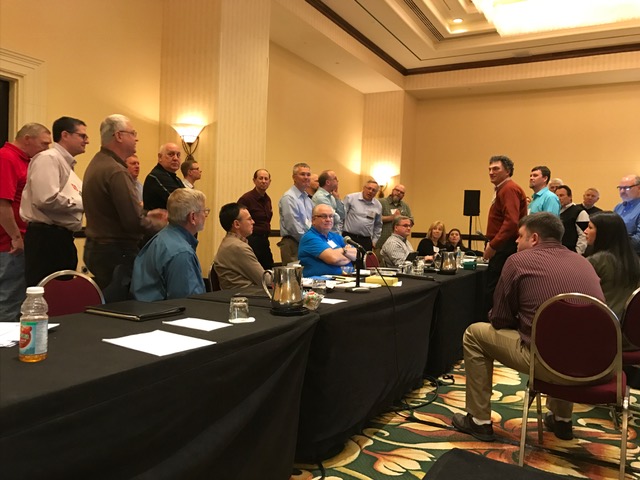 If you’ve ever considered technical meetings to be a bit dry and dull, then you’ve never attended one like that of the Glass Association of North America’s (GANA) Laminating Division meeting, which took place last Friday during the association’s Annual Conference in Hilton Head, S.C. 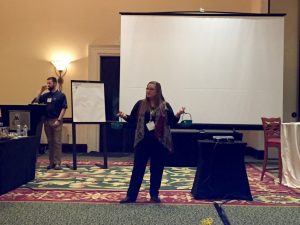 After dividing the laminated meeting attendees into two groups, Julie Schimmelpenningh appointed a coxswain to each, giving them both a basket of candy bars. The candy was then given to individuals wishing to argue their case for the issue being debated.

Julie Schimmelpenningh with Eastman Chemical moderated a “hot topics” debate that was anything but dry or dull. Those in attendance—regardless of personal views and opinions—were divided into two groups, one to argue for and the other against three topics the division is currently considering.

To begin, Schimmelpenningh used a rope to divide the room in half and assigned each side a “coxswain,” the person who would direct each group in terms of who would speak up, argue, etc. Before someone could argue their side, they were given a candy bar by the coxswain.

The first issue concerned sealant compatibility within laminated glass. After a lively debate, the groups decided they would move the sealant test procedure into an ASTM format and then propose for ASTM adoption. They will need to define the proper committee, though, as it likely does not fall into one of the normal committees, such as C14 or E06. 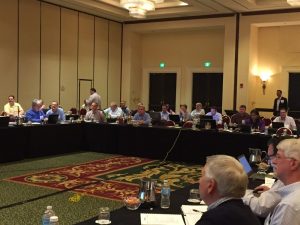 A yellow rope split the meeting room into two groups; one group argued for the issue being debated and the other argued against it.

For the next debate, the rope was shifted to split the room horizontally, forming two new debate groups. This discussion addressed heat soak requirements and their applicability to laminated glass. The question raised was whether GANA should start a task group with the objective of developing a heat soak standard for heat-strengthened and heat-treated glass that would clearly define its applicability in laminated construction. In the debate, a motion was presented to develop a task group that would look into developing this standard around laminated glass. The motion did not carry, though, as the overall agreement was the issue was related to tempering, rather than laminating.

In the third debate, the room was divided diagonally and groups addressed a durability standard for laminated glass. At this point that’s something that the ASC Z97 committee is going to continue with; GANA would be involved in reviewing and approving it.

There was no consensus within GANA, though, to move forward with a laminate durability standard.

GANA’s Tempering Division also met on Friday afternoon and included a presentation on furnace design trends led by Hermann Frey of IGE Glass Technologies Inc./VIG Technologies LLC. Frey offered a look at the evolution of tempering furnaces over history, from vertical to horizontal. In the 1980s, he said, horizontal glass tempering took over the market, with the oscillating drive system being a key feature. Horizontal processing, he said, offered several advantages to vertical lines, including no tong marks, easy loading/unloading; larger glass size possibilities and no changes in dimensions and thicknesses.

In the first horizontal furnaces the glass was heated by radiation only, and he explained that the development of infrared reflective coatings brought the radiation furnaces quickly to the limits.

He noted that with the introduction of IR reflective coatings, heating methods reached their limits because the more reflective the coatings the more challenging it was to heat the glass evenly.

In the spirit of keeping technical meetings fun, the Tempering Division ended with an educational “Smarter Everyday” Youtube video about glass. Take a look for yourself here.