A panel discussion focusing on polyisobutylene (PIB) quality control testing and fabrication opened the Glass Association of North America’s (GANA) Annual Conference today in Hilton Head. Three presenters—Claudia Mosanu with H.B. Fuller, Mike Speicher with Royal Adhesives and Paul Chackery with Fenzi North America—answered questions during the Insulating Division meeting that covered a variety of topics related to the use of PIB in insulating glass units. 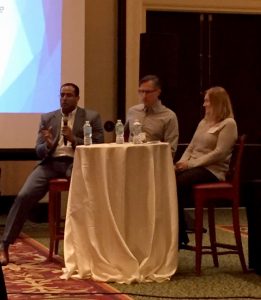 One of the questions asked by GANA technical director Urmilla Sowell, who moderated the discussion, addressed typical outgoing quality control checks for PIB.

Speicher noted that these can include density, air content, color, adhesion and package labeling, which are all things they’re responsible for as a vendor. Chackery added that yield stress is also important.

Another question that was asked concerned the recommended durability tests for formulated PIB. Mosanu said her company follows the standard procedure for accelerated aging and also has an internal test based on ASTM E 2190, the standard specification for insulating glass units. She said they do this together with the IG fabricators. Once units pass the internal test, she explained, they have confidence they will pass E 2190.

Speicher added that while manufacturers all may have different approaches during development, at the end of the day heat and UV are the enemy, so it’s important to measure and test for those as well.

Ultimately, though, the industry determines measures to which the products should be tested. Chackery explained, “the industry dictates the durability test for us, and right now it’s ASTM E 2190 … [there should be] communication from the industry. We will push the envelope as best we can, but the direction has to come from other places …”

Mosanu advised following instructions, having the correct design for the IG and having the correct selection of the secondary sealant. Chackery agreed and added that fabricators must follow the application guidelines that they’re given.

Sowell also asked panelists about how much PIB movement is likely to occur over a ten-year period. This, according to panelists, depends on the location of the units, how much sun/heat they get, among other issues that can create movement at the edge seal.

Another question asked was whether gray and black PIB perform the same. Speicher said there are distinct advantages to black, and there also are a lot on the non-black side that can also overcome issues. He said this is very formula specific.

Mosanu said she didn’t think that in a residential application there would be a big issue if gray was needed for color purposes to match the secondary seal. For structural applications, though, she said you need to be very careful when using gray, and IG fabricators should select the best gray available on the market for these situations.

Chackery pointed out that carbon black acts as a reinforcement, noting the tire industry is a good example. “You don’t see a lot of gray tires,” he said. “… It’s not so fair to say [gray is] equal to black … you will be hard pressed to match the formula that carbon black brings.”

Sowell also asked whether gray and black have the same life expectancy. Speicher said again, it’s a matter of formulation and whether it will stand up to the use of the IG.

“That’s what you’re looking for, not black versus gray,” he said.

Compatibility with other components was also discussed. Speicher explained that manufacturers don’t necessarily have control over what their materials come into contact with. He said the users and customers need bring it to the supplier’s attention and “then we can evaluate it to say whether it will work … we’re willing to do it, but need to know what’s coming into contact with the IGU.”

Panelists agreed that, as suppliers, they are willing to work with fabricators to make sure the components in the system works together.

GANA’s Annual Conference continues this week in Hilton Head, S.C. Stay tuned to USGNN.com™ for more news and updates from the event.