WDMA Gets Down to Business at Spring Meeting

The Window and Door Manufacturers Association (WDMA) took a deep dive into policy this week during its spring meeting and legislative conference in Washington, D.C.

The heart of the annual gathering is the Capitol Hill visits, in which WDMA representatives visit members of Congress to lobby for policies that could have a positive effect on the commercial and residential door, window and skylight industry. 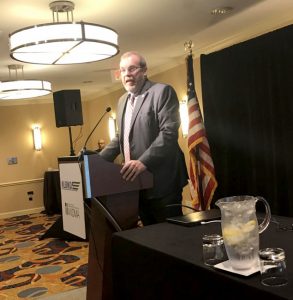 In energy efficiency, WDMA government affairs director Kevin McKenney urged members to ask the House and Senate to co-sponsor building-code language supported by Reps. Marsha Blackburn (R-Tenn.) and Kurt Schraeder (D-Oregon) and include it in any comprehensive energy legislation considered by Congress.

The “Blackburn/Schrader” language would force the Department of Energy  (DOE) to publish energy savings targets, code-change proposals and all supporting analysis and methodology in the Federal Register and accept public comment; prohibit DOE from advocating for certain products/technologies; and require any code or proposal supported by DOE to have a simple payback period of ten years or less.

For the controversial LRRP rule, WDMA wants members of Congress to sign a letter to the EPA asking the agency to consider changes to the rule, such as restoring the opt-out provision for homes without a child under the age of six or a pregnant woman. The lack of an accurate test kit for lead paint is also an issue that WDMA wants the EPA to address.

Finally, for regulatory reform, WDMA wants members to advocate for REINS Act, which would require congressional and presidential approval for any new rules that would have an economic impact of $100 million or more. WDMA also supports two “sue and settle” bills that would require agencies to publically disclose information about lawsuits and settlement agreements to Congress. Additionally, WDMA backs the Regulatory Flexibility Act, which combines parts of six earlier regulation-reducing bills.

WDMA also issued a set of talking points regarding Energy Star, the popular voluntary energy-efficiency certification program run by the EPA that could be eliminated under President Trump’s 2018 budget plan.

“WDMA believes programs to assist consumers in readily identifying energy-efficient products, including windows, doors and skylights, should be a part of a thoughtful, national energy policy,” the statement reads. “The Energy Star program has helped to provide that assistance. It is a proven, successful program that has saved consumers billions of dollars in utility costs and billions of tons of CO2 emissions in the 25 years of its existence. However, any program such as Energy Star must be based on reasonable energy efficiency targets that balance commercially proven and durable technologies which are cost-effective, affordable and appealing to consumers. While WDMA is supportive of the program, we believe there are improvements that can be made to it. Its purpose should be to reduce total energy consumption rather than create market strata or push latest technologies that may have little to no payback. To that end, we are ready to work with Congress, the administration and the EPA to accomplish that and hope we have the opportunity to do so.”

Prior to the WDMA Capitol Hill visits, the association hosted its annual Washington Briefing Breakfast, which features addresses from members of Congress. This year, the speakers were freshman Rep. Ted Budd (R-N.C.) and veteran Rep. Morgan Griffith (R-Va.).

Both discussed over-regulation and the ways the government can distort markets.

“Government can drive the economy, but it can drive it right over a cliff, too,” Budd said. “I would rather have government out of the way. We want to avoid false bubbles, such as what happened to the housing market a few years ago. Let’s not have socially motivated mortgage underwriting. Let’s have it based on sound economic principles.”

“We’re going to have to do regulatory reform and tax reform,” he said. “I think our economy explodes with tax reform.”

This entry was posted in Uncategorized and tagged WDMA, Window and Door Manufacturers Association. Bookmark the permalink.