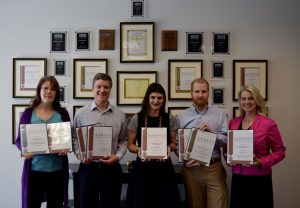 Several members of the staff received a bronze award in the trade show/conference coverage category for their coverage of glasstec 2016. This includes Chris Bunn, director of video production; Ellen Rogers, editor; and St. Denis.

In the design and infographics category art director Saundra Hutchison won a bronze for her work in USGlass magazine in 2016.

“Key Communications’ staff won eight awards yesterday, which is a record for us,” said Debra Levy, publisher of USGlass magazine. “I could not be prouder of our staff and the efforts they put forward every day.”