Sen. Jeanne Shaheen (D-N.H.) addressed the final day of the EE Global Forum in Washington, D.C., on Tuesday with a warning about the danger of eliminating government programs that boost energy efficiency.

“Your theme is innovation, disruption and investment,” she said while accepting the EE Visionary Award at the Walter E. Washington Convention Center. “At the same time, what we’ve seen is a legislative proposal that would call for deep cuts. I think it’s clear that these are ill-advised cuts. They will kill jobs, raise costs for consumers and businesses, and hurt America’s competitiveness in the global economy. I will continue to fight those cuts.” 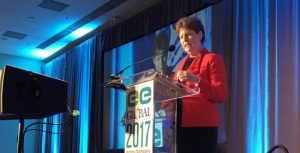 Shaheen suggested that many of the Trump administration’s proposed reductions to the Environmental Protection Agency and the Department of Energy would face strong opposition from across the political spectrum.

“The fact is there is bipartisan support for programs like Energy Star and the weatherization program,” she said. “We understand that these programs bring benefits to the American people.”

Shaheen added that the concept of energy efficiency—which is a key driver in the development of glass and glazing products, as well as fenestration requirements in building codes—won’t be rolled back by temporary changes in Washington.

“Despite what may happen at the federal level, what we have seen at the state and municipal level and from the private sector is that the effort to support energy efficiency will continue,” she said. “There is a revolution in how we think about and use energy and it will not be derailed. Robust efforts will continue at all levels.”

The experts on this panel discussed the role of building labeling in driving greater efficiency standards in commercial and residential markets. There are several examples of these policies across the country, mostly at the city level, but several states have also implemented policies. The Lawrence Berkeley National Laboratory recently released an analysis of these policies demonstrating that building labeling policies do have an impact on building energy use and can reduce energy consumption by 1.5 – 14 percent.

There’s also evidence that these policies are being implemented at an increasing rate, with six of the 24 existing policies having gone online in the past six months.

“You can’t manage what you don’t measure,” said Cliff Majersik, executive director of the Institute for Market Transformation. “The concept here is you want to create a virtuous cycle where business owners are competing to be energy efficient. Some of these cities are there explicitly to drive job creation to keep commercial and multifamily spaces competitive. Eventually you won’t be in Class A office space without a label. We’ve got a long way to go, but we’re on a trajectory to achieve that.”

A separate study, conducted by the National Electrical Manufacturers Association, attempted to determine the effect of the new building energy benchmarking and transparency in New York City. It found that 77 percent of buildings were making operational improvements and 75 percent were making capital investments in energy efficiency as a result of the policy.

Buildings that are labeled “energy efficient” can also reap financial rewards for owners.

“In every case, we’ve found that Energy Star-labeled buildings sell for more, they rent for more and they have lower vacancies rates,” said Majersik. “And they sell faster.”

Majersik added that it’s important to get energy labeling into the residential market as well.

“Appraisal is a volume business,” he said. “Unless it’s right at your fingertips, you’re not going to be able to look at energy. The solution is not to work with appraisers on the ground. The solution has to be at a systemic level by bringing in the multiple listing services. You must have energy cost savings as part of your underwriting. There’s been some movement on the multifamily side. We need to see single-family follow suit. We need some bold thinking. Tenant demand will drive acceptance.”

Jordan Doria, vice president of marketing and communications with the North American Insulation Manufacturers Association, said large homebuilders could be leaders in this area.

“Ultimately, it’s going to take builders to make labeling take hold in residential,” he said. “Many are opposed, because new energy codes are pressing a lot of builders. But from their standpoint, it would make a lot of sense. We’re moving in that direction.”

Moderated by Hannon Armstrong president and CEO Jeff Eckel, this panel discussed success stories and opportunities from energy savings performance contracts (ESPCs) as well as limitations on their expansion. ESPCs allow federal agencies to procure energy savings and facility improvements with no up-front capital costs or special appropriations from Congress. An ESPC is a partnership between an agency and an energy service company (ESCO). On the domestic front, panelists and audience members were optimistic that ESPCs would continue to expand under the new administration, noting that shrinking budgets could encourage ESPCs and that projects could fit well in the administration’s plans for a national infrastructure package. Franz Wuerffmansdobler, senior policy adviser to Sen. Chris Coons (D-Del.), said the outlook for energy legislation affecting ESPCs and other efficiency initiatives, such as the Portman-Shaheen bill, is uncertain. Satish Kumar of the Alliance for an Energy Efficient Economy said India has seen more success in energy-saving procurement practices, but enormous gaps remain between best practices and typical procedures.

Smarter Cities: What Trends Are Driving Urban Efficiency and Resilience?

This session, moderated by Clay Nesler, vice president of Global Energy & Sustainability, featured speakers Jill Anderson, executive vice president and chief commercial officer for the New York Power Authority; Ted Atwood, chief of the Sustainable Energy Office for the  City of Baltimore; Francis Slakey, the Upjohn Lecturer on Physics & Public Policy at  Georgetown University and Katie Clarke of the U.S. State Department for a dialogue on how American homeowners, consumers and businesses engage in energy efficiency at the local level. Cities and counties, utilities, community organizations and institutions of higher education can generate positive benefits faster for Americans and local employers than Congress or government agencies. In many areas, cities and community-based organizations are providing leadership by improving the energy efficiency of their own building stock, generating new program-design best practices, and delivering innovative opportunities for energy efficiency to residents and businesses.  The best returns on efficiency investment, according to the panelists, are the results of engagement up and down the ladder: coordination and support among international, national, state and local stakeholders in the public and private sectors.