The nonresidential specialty trade contractors sector, which includes contract glaziers, saw a slight decline in employment in April, according to USGNN.com™ analysis of U.S. Bureau of Labor Statistics data. 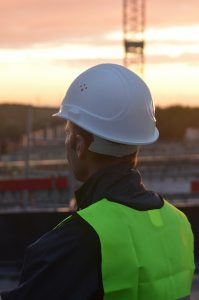 Average construction hourly earnings are up 2.1 percent compared to a year ago, and construction pays 9 percent more, per hour, than the average non-farm job in the U.S.

The segment shed 5,100 jobs from March for a 0.2-percent dip, though its 2,453,200 workers in April represents a 2-percent increase from April of 2016. The nonresidential building category, which also includes building exterior contractors, added 4,000 jobs for a 0.5-percent increase on a monthly basis and a 0.2-percent bump to 762,700 from the same time last year.

“It is conceivable that this occurred as certain segments of private development have begun to slow, including key commercial segments,” Associated Builders and Contractors (ABC) chief economist Anirban Basu said in an ABC release. “Conversely, the loss in nonresidential specialty construction positions may simply be a one-month statistical anomaly.”

The residential specialty trades, which includes glass installers in single-family homes, increased employment by 0.2 percent for the month to 1,928,900, marking a 4.2-percent year-over-year jump. According to the Associated General Contractors of America’s (AGC) analysis, the 6,877,000 job total, thanks to a 5,000-job increase in April, is the highest level in more than nine years.

Glazing contractors entered the year with great intention of hiring, according to the 2017 Glass and Glazing Industry Outlook, though many were concerned about the industry’s ongoing skilled labor shortage. This trend has been evident throughout the first part of the year. Meanwhile, labor costs and worker pay have increased as the construction industry as a whole tries to attract new people into the field.

AGC officials note that average construction hourly earnings are up 2.1 percent compared to a year ago, and construction pays 9 percent more, per hour, than the average non-farm job in the U.S.

“It is time for our elected officials to start signaling to students that high-paying construction jobs should be on the menu of possible career choices,” AGC CEO Stephen Sandherr said. “The best way to send that signal is to provide the funding and flexibility to set up programs that expose more students to the opportunities that exist in construction careers.”