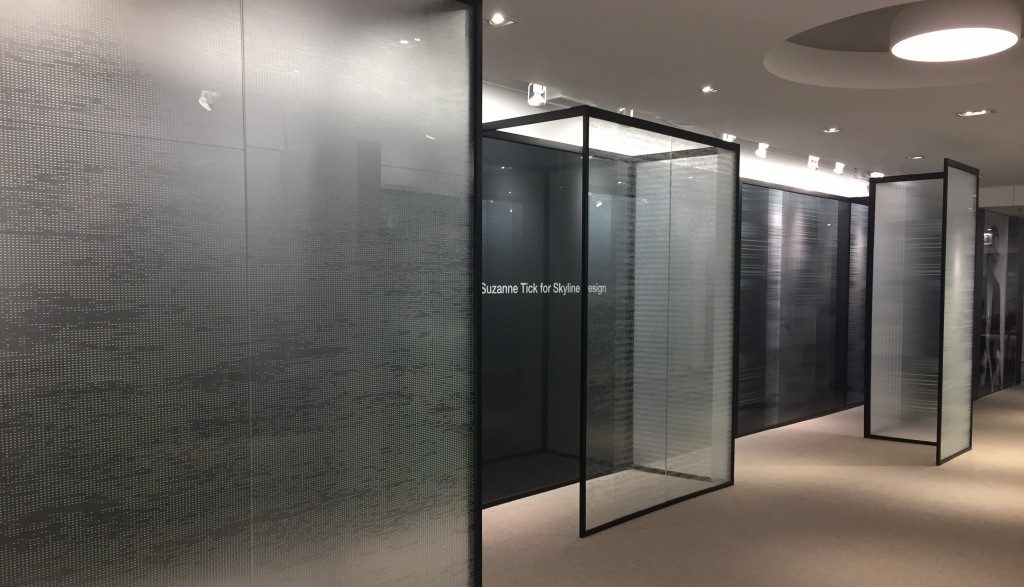 Skyline Design’s exhibit at NeoCon 2017 in Chicago this week.

The three-day commercial design-focused NeoCon 2017 show wrapped up Wednesday in Chicago, and glass made its mark with exhibitors across various segments of the industry showcasing the best they have to offer for the interior space.

“We have a lot of experience in [the interior] market, and our commitment to collaborative customer support lends itself well to designers and furniture dealers that are exploring newer and unique applications,” says director of marketing Bill Wilson. “… Whether it’s a project we are participating in or just pointing people in the right direction to facilitate their success.”

Wilson says Kensington discussed its fabrication capabilities, including tempering, edging and heat-soaking, as well as its new Boraident laser for temper logos. 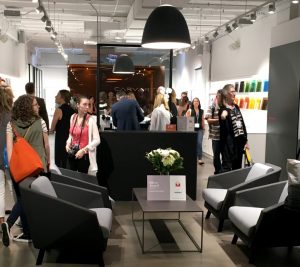 “Similar to our exhibit at NeoCon East 2016 in Philly, we have met several new prospective clients and received a lot of positive recognition from prior clients and designers who have seen KGa in a new light as more than just a regional supplier.”

Gardner Glass Products, based in North Wilkesboro, N.C., featured its decorative capabilities at the event.

“The show was very strong for us,” says vice president of marketing Mandy Marxen. “We made a lot of good connections with companies that are excited about what we do. Interior designers are now so much more aware of what glass can do for a space. We spend less time in our booth educating them on the benefits of glass than we used to. Now they are actively seeking out good glass suppliers.”

Chicago-based fabricator Skyline Design didn’t have far to travel to showcase the launch of its Transcend glass collection, which consists of a half-dozen new patterns by award-winning textile designer Suzanne Tick. The product is used for privacy and in public spaces, in applications such as feature walls or conference rooms.

Skyline also featured new work by artists Laura Letinsky and John Paul Morabito for its digital glass portfolio. “Letinsky’s digital photo collages were abstracted and woven by Morabito,” says Newmark. “Now translated into glass, the images are brilliant in color and texture, and saturated with a quiet nostalgia.” 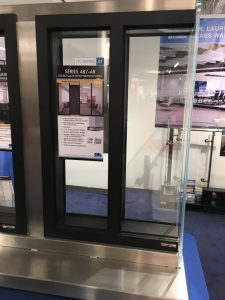 CR Laurence (CRL), a supplier of many products across the industry, was on hand with its demountable walls for office interiors. Its new 487AR system—which features ladder pulls in the ceiling and soft closing on doors—is STC-tested for acoustics. With the system, normal speech cannot be heard on the other side of the glass, according to the company.

“Designers, architects, facility managers and end-users, come to NeoCon to see what’s new in interiors, and to learn about what’s really going to help them with their requirements,” he says. “Demountable walls and office fronts are a really important component of that.”

Phillips says the event was busy, which “shows the economy is strong and business is good.”

Carvart, based in New York City, showcased its patterned and back-painted glass used for spaces such as lavatories, changing rooms and locker rooms. Its capabilities include carved panels for windows and doors, as well as laminated glass panels and interlayers using meshes, woods and cork.

Markerboards were prevalent throughout the show floor. Companies such as Lebanon, Ohio-based Ghent featured its products, which have no exposed hardware and include integrated storage solutions with magnetic clips. Its mobile unit includes glass on both sides with the option of fabric mixes for aesthetics. 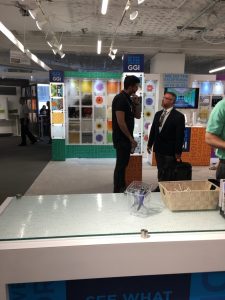 Clarus Glassboards, out of Fort Worth, Texas, also demonstrated its markerboards, which are made from Vitro’s Starphire glass and silk-screened, providing anti-glare surfaces. Its Go Mobile product launched in April and can be rotated and relocated.

General Glass International, based in Secaucus, N.J., featured its back-painted and printed glass—95 percent of which it claims is custom. It highlighted printing on the back side of textured glass.

Warrington, Pa.-based paneling systems company SnapCab showed its television-in-glass panel, which is available in 12 different widths and two different heights. The glass can be fully customized including logos, graphics, and full-pixel imaging.

Lisa Naugle contributed to this report.