The renowned Space Needle in Seattle is about to undergo a major renovation, and almost the entire project revolves around glass—more than 176 tons of it.

A new steel, wood and glass circular stairway will spiral from the observation deck to the restaurant level, with a glass-floored oculus at its base. That level will also be upgraded with floor-to-ceiling glass, and its original rotating floor will be replaced with a glass one, providing a view down to the Space Needle’s entire structure. 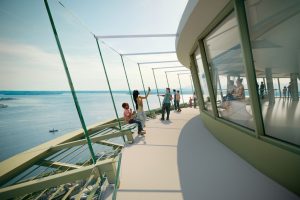 In all, approximately 17,000 square feet of glass will be installed on the project, increasing views by 25 percent, according to information from the company. Glass will be sourced from Switzerland, Germany and California. As of press time, a representative of Space Needle LLC hadn’t responded to a request for further information on which fabricators and contract glazier are involved in the project.

Each glass lite on the outer observation deck will measure ten feet tall and nearly two inches thick, weighing 2,300 pounds. Ten different glass types will be used in the project, including insulating and coated glass for optimal energy performance.

According to Space Needle LLC, the walkable glass on the restaurant level is the first rotating glass floor to be installed in a building open to visitors.

“The soffit glazing under the restaurant level is designed to simulate the original metal cladding on the underside of the Space Needle while allowing for the clearest view from the restaurant downward,” a description from the company reads. “Its appearance is achieved with a custom ceramic product on the outside surface to match the color of the historic metal cladding from 1961.”

The landmark was built in 1962 to define Seattle’s skyline for the Century 21 World’s Fair and aims for LEED Platinum certification with the new upgrades. This project will mark the structure’s third major renovation in its lifespan.

“I believe we’ll look back at this as a pivotal moment in the history of the Space Needle,” said Jeff Wright, Space Needle LLC chairperson, in a statement. “This project both connects us back to our roots, to the vision that my father and his partners had when they built the Space Needle in 1962, and guides us forward into the future for generations to enjoy.”

In partnership with design firm Olson Kundig, led by design principal Alan Maskin and project architect Blair Payson, the project team worked closely with the City of Seattle Landmarks Preservation Board, local architecture historians and preservationists, a surviving original Space Needle structural engineer, and the community to be ensure consistency with the original design intent. Under the direction of Hoffman Construction Co. and Seneca Group, construction will start fully in September 2017, with some pre-work this summer. The Space Needle will remain partially open during the course of the work. Instead of closing and scaffolding the entire building, the project team will do most of its work from an elevated work platform just below the restaurant level.

The initial phase of construction is expected to be complete by June 2018. Guests visiting during the construction phase will be able to see the work in progress, including the new sections of the observation deck as they are completed.

This entry was posted in Featured News, Today's News. Bookmark the permalink.