Arconic to “Vigorously” Defend Itself in Lawsuit

The manufacturer of architectural panels used on London’s Grenfell Tower that was destroyed in a deadly June 14 fire is facing two class action lawsuits. The company says it plans to “vigorously” fight the allegations, which claim the manufacturer defrauded investors. 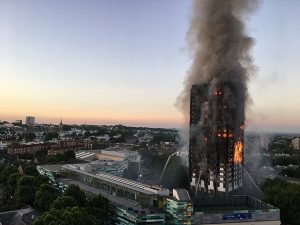 Michael Brave and Frank Tripson, investors in U.S.-based Arconic, filed separate lawsuits in a New York federal court accusing Arconic of violating the Securities Exchange Act. They claim the company made false and misleading statements, or failed to disclose information, regarding alleged fire-hazard concerns about its Reynobond PE product, which was installed on the Grenfell Tower. This, the lawsuits claim, artificially inflated Arconic’s stock prices, which fell approximately 15 percent following news that the panels were used on the building and have partially recovered since.

“The plaintiffs’ bar has made securities cases a predictable follow-on from tragedies like this,” an Arconic spokesperson told USGNN.com™. “We believe these claims are meritless and will vigorously defend ourselves.”

Arconic confirmed in a June statement that it supplied Reynobond PE to a fabricator that “used the product as one component of the overall cladding system on Grenfell Tower.” The company added, “The fabricator supplied its portion of the cladding system to the facade installer, who delivered it to the general contractor. The other parts of the cladding system, including the insulation, were supplied by other parties. We were not involved in the installation of the system, nor did we have a role in any other aspect of the building’s refurbishment or original design.”

The company claimed that while it provided general parameters for the product to potentially be used universally, it sold the panels “with the expectation that they would be used in compliance with the various and different local building codes and regulations. Current regulations within the United States, Europe and the U.K. permit the use of aluminum composite material in various architectural applications, including in high-rise buildings depending on the cladding system and overall building design. Our product is one component in the overall cladding system; we don’t control the overall system or its compliance.”

As of June 26, Arconic decided to no longer provide Reynobond PE in any highrise applications, regardless of local codes and regulations.

The fire, which took the lives of at least 80 people and caused more than 70 other injuries, has gained extensive news coverage, which has largely been focused on the role the building’s cladding played in the quick spread of the fire.

A criminal investigation into the fire is underway.