EPD Chatter and Tempering Activities Round out GANA Meetings

Participation steadily grew throughout the Glass Association of North America (GANA) Fall Conference last week, as meetings in the second half of the event covered division activities in energy, tempering and more. The conference was held in Atlanta in conjunction with GlassBuild America.

Laminated glass and issues regarding decorative coatings highlighted the first day and a half of meetings, followed by a gathering of the association’s energy division. Wednesday afternoon, the group continued to discuss the possibility of developing an industry-wide Environmental Product Declaration (EPD) in the Life Cycle Analysis (LCA) task group, led by Helen Sanders of Technoform Glass Insulation North America.

The group generally agreed during the same meeting last year that it would take a wait-and see-approach, but GANA technical director Urmilla Sowell said “the conversation has changed since then,” as fabricators are now being asked to provide EPDs whereas they weren’t before. 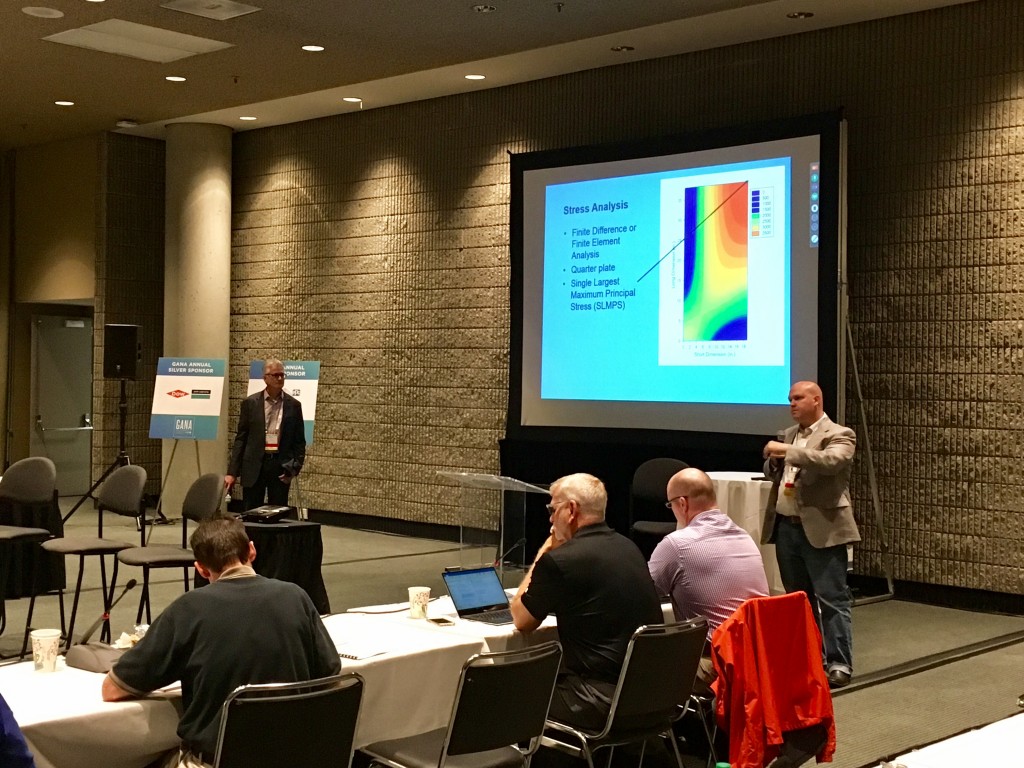 Mark Schmidt of Wiss, Janney, Elstner Associates and Stephen Morse of Texas Tech University give attendees a presentation on their methodology for assessing the structural capacity of polished heat-treated glass.

There is some skepticism among members as to the amount of work that would need to be put in to this process for the minimal LEED-point reward the EPD provides to architects and building owners. However, those in favor of the EPD argue that the advantage lies with the suppliers, since specifiers in some cases are apparently favoring products with EPDs over those without.

At least two fabricator and manufacturer representatives expressed interest in participating in the EPD development, and the LCA task group will send out a note to membership to garner more interest. If the industry-wide EPD idea moves forward, only the participating companies would see the benefit as they’d be incurring the cost. However, GANA could serve as the organizing body and work with a third party to verify the EPD.

The building envelope contractors (BEC) division kicked off the final day of the conference, covering a range of topics. Matt Kamper of Woodbridge Glass was welcomed as the new chair of the technical committee. He  replaces Chuck Knickerbocker of TGP, who was recognized for his five years of service in that post.

Ben Beeler of Administrative Management Systems gave attendees an update on the progress of the North American Contractor Certification Program for Architectural Glass and Metal Contractors, as well as an in-development glazing technician certification program. Also touched on was the possibility of developing standardized contract terms for glazing contractors, which should garner more discussion in future meetings.

Additionally, the group is finalizing a course designed for beginning estimators on the contract glazing business, called the “Blue Print Reading and Labor Estimating Course.” According to GANA, “It is intended to provide the beginner with many of the basic facts about the materials used as well as a basic systematic approach to estimating metal, glass and labor.” It is in balloting stages and will soon be formatted for publication.

The tempering and flat glass manufacturers division wrapped up the meetings, with the former discussing its many Glass Information Bulletin (GIB) activities. The division recently published GIBs on producing heat-treated glass, understanding heat soaking and iridescence patterns. It continues to work on at least three other GIBs, including one covering thermal stress in spandrel glass. Also, a task group reviewing the ASTM C1048 standard specification for heat-strengthened and fully tempered flat glass has finished its review process—which included five webinars—and an updated standard will be sent to ballot.

During the meetings, outgoing tempering division chair John Colapeitro was recognized for his service, but not before he gave the group an update regarding ongoing work to revise the Heavy Glass Door Design Guide, which was first published in 1997. He showed what some of the document’s updated graphics look like and said it should be published by the end of 2017 or early 2018 at the latest. “It’s been a long process,” he said … but a lot of good work was done.”

Mark Schmidt of Wiss, Janney, Elstner Associates and Stephen Morse of Texas Tech University gave attendees a presentation on their methodology for assessing the structural capacity of polished heat-treated glass. They discussed the wet and dry-polishing methods used in restoring blemished glass to an acceptable aesthetic condition and the effect they may have on the glass’ structural integrity. To conclude the conference, most of the flat glass manufacturing division meeting was closed.