GlassBuild America is at the end of its three-day run. Many exhibitors showed products with a focus on safety the meeting changing standards. 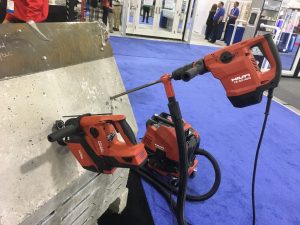 The rule, which was announced in March 2016, reduces the permissible exposure limit (PEL) for workers. It also requires employers to implement engineering controls, offer medical exams and develop control plans related to the issue. The standard goes into effect on September 23.

Hilti showed its Table 1 compliant hollow drill bits, which remove dust through a vacuum system while drilling is in progress.

“Our mode for the last year has really been in the education side. We’ve provided a free webinar that any customer can sign into or listen to,” said Bill Gevers, trade manager at Hilti. “We see it as a game-changer in the industry. It makes a big difference. Customers are going to have to plan for it. They’re going to have to get the appropriate equipment. And more than likely they’re going to have to estimate more time to do applications than they were in the past.”

Glassopolis, a specialty architectural glass supplier, is showing its FIRESWISS LAM20. The fire-rated laminated glass is both fireproof and bullet resistant. Its main applications would be for locations with high security needs like airports, embassies and hospitals.

The company is also readying itself for the upcoming changes in Canadian building codes. Glassopolis has invested in a new production line to meet the specific needs of Canadian companies.

“Now with modern machines and modern technology, you can have fire glass and impact safety glass together. The rules in Canada used to allow them to prioritize fire safety and ignore impact safety,” said Rob Botmas, general manager of Glassopolis. “All of our products comply with the new codes. America has had these rules for a couple of years already, but the Canadian market has different aesthetics, preferences and pricing. So what works in America may not work in Canada.”