Robots Could Soon Be Our Co-Workers

Robots are being widely used in many industries today, including the manufacture of glass and glazing products — and many more are coming. In fact, a new study shows that 79 percent of top executives expect their employees to be working comfortably alongside robots by 2020.

However, most businesses aren’t providing adequate training to address technological change according to research conducted by Genpact, a professional services firm focused on digital transformation, and FORTUNE Knowledge Group.

While 82 percent of respondents say they’ll deploy artificial intelligence (AI) technologies within the next three years, most companies haven’t planned for the widespread organizational changes that will be needed to integrate new technologies.

“The survey findings underscore what we see with our clients daily – success won’t come simply from technology alone,” said N.V. ‘Tiger’ Tyagarajan, Genpact’s president and CEO. “Companies must train their workforce – at all levels – and encourage the right corporate culture. Collaboration between humans and machines has the power to improve customer experiences, grow revenue, and create new jobs – but only if senior management has the vision to proactively prepare and embrace change.” 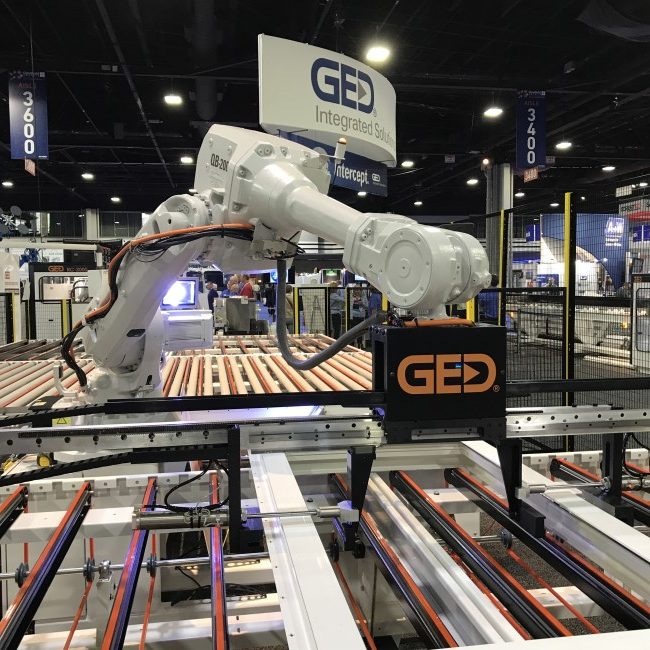 Robots made an appearance at the recent GlassBuild America show in Atlanta. For example, GED displayed Roboflow, its new window automation material handling system that integrates a four-point welder with Roboclean (RC-2000) cleaner via a robotic handling station, the QB-2000.

GED’s booth also had a product that demonstrates the key finding from Gepact’s study.

ABB Robotics created YuMi to meet production needs in consumer electronics manufacturing. It’s a dual-arm industrial robot that can solve a Rubik’s Cube. The company says it could be a precursor to robotic “co-workers” that will be able to work side-by-side with humans safely.

While robots are a becoming a major part of manufacturing, they’re also starting to be used in some construction applications, including installation of fenestration products.

For example, Blueprint Robotics in Baltimore runs a robotic assembly-line operation that builds modular housing. The walls for modular homes are assembled along a robotic production line. (The company says it can crank out 40 feet of framed wall in about 11 minutes.) Robots then precisely cut the rough openings for doors and windows. After adding drywall, insulation and siding, a pneumatic gantry picks up the doors or windows, places them in the openings and secures them in place. Carpenters in the factory then finish the fastening and flashing.

While AI’s future in the industry isn’t in doubt, it won’t be a smooth path to get there. Genpact’s research shows that the top three barriers to AI adoption are security worries, disagreements about where to apply AI most effectively, and silos within organizations, such as those between information technology and other business operations.

To answer some of those concerns, FeneTech unveiled its newest initiative at GlassBuild, FENml. That stands for “fenestration manufacturing language.”

According to the company, FENml is for glass fabricators, door and window manufacturers, machinery manufacturers, software providers, and other suppliers to the industry. FENml is envisioned as a baseline communication standard that will use the concepts of the Internet of Things (IoT) and Industry 4.0, allowing machinery, software and suppliers to “talk” the same language.

Industry 4.0 refers to the computerization of machines in the manufacturing process. IoT refers the inter-networking of items with embedded technology that lets them collect and exchange data from the Web.

FeneTech’s Ron Crowl describes FENml as “… the ability to easily collect and analyze data so that proactive informed decisions throughout the value chain can be made is where we as an industry need to go. FENml is a building block in this pursuit. At FeneTech we are looking for forward-thinking industry partners to join us in the creation of this standard and to become early adopters of this exciting technology.”

FENml would be powered by IoT devices and protocols that enable systems to communicate. Equipment can capture and relay data that can be analyzed to provide information that influences future business decisions. Devices, using IoT, communicate to the user. These devices are generally simpler and cheaper because the heavy lifting is done by servers operating in the cloud.