Industry Finds the “Best of Italy” at Vitrum 2017

Vitrum 2017 has been underway this week at the Fiera Milano Rho in Milan, Italy. According to show organizers, visitor pre-registrations grew four-fold compared to two years ago. The net exhibition area is more than 13,000 square meters accommodating 237 exhibitors from all over the world. 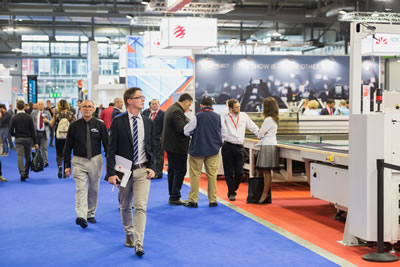 “This is year zero for us,” said Dino Zandonella Necca, president of Vitrum. “We expended all of our efforts in this year’s edition in terms of synergistic activities, involvement and promotional initiatives that already paid off in Murano, in June, with the organization of the first International Convention of Glass Associations. Today Vitrum is officially embarking on a new path marked by global activities to put our industry on the world map and strengthen its strategic, all-round importance.”

Laura Biason, Vitrum director, added, “Vitrum 2017 is traditionally an eagerly-anticipated event and ranks among the leading international glass shows. The value of the machinery on display this year is in excess of €12 million ($14 million), tangible proof of the importance attached by both Italian and overseas companies to our exhibition.”

Many of the machinery exhibitors have been highlighting their latest innovations and technologies for the glass industry. Salem Flat Glass & Mirror, for example, is one U.S. company there with the machinery manufacturers it represents.

“This year’s Vitrum continued to showcase new trends in automation that are geared toward increasing production and efficiency in glass fabrication,” said Doug Mangus, machinery sales director with Salem. “Two major areas of focus were vertically oriented CNCs and robotic material handling. These types of machinery are what the glass industry is requiring to keep up with today’s everchanging and demanding market.”

Michael Spellman, CEO of IGE Glass Technologies, said the show has been going well for his team.

“We have seven people from IGE here and we are enjoying every minute. It is so great to be able to see all of our 17 manufacturers in one place,” said Spellman, adding, “Food and drink is beyond great. Add good people to this equation, and you have the best of the best in Italy.”

Forel is another machinery company exhibiting at the show. Michael Schmidt, president of Forel North America, said the show turnout has been similar to what it saw in 2015.

“This is mostly a Southern Europe ‘regional’ trade show with some customers from around the world popping up here and there. We have been in contact or aware of some North American customers being here, but the quantity is not overwhelming,” he said. “In general, the limited customers from North America are here to buy, not browse.”

Nancy Mammaro, president of Mappi, added that the show has been going very well, and they’ve seen lots of people from both Italy as well as a good number of others from all around the world.

In addition to the show floor, Vitrum offers a number of seminars and educational sessions covering a variety of topics, including one that looked at “What’s Hot in Glass Processing.” Innovation was the common thread among presenters from ADI, Glaston and RCN Solutions, who talked about technologies dedicated to the flat glass, hollow glass and accessories for the glass processing.

Another session focused on new laws and standards for glass products in building and construction, and was organized by Assovetro, CSI Spa, Gimav, the Order of Engineers and the Stazione Sperimentale del Vetro (under the aegis of the Italian Trade Agency and Vitrum). The work session was opened by Mario Boschi (Assovetro) who provided details about national standards. Ennio Mognato, head of the Laboratory for Flat Glass in Building at the Stazione Sperimentale del Vetro illustrated international rules and regulations in detail. The session was closed by Marco Scanagatta, in charge of voluntary and mandatory product certification for CSI Spa (Certification Institute and Test Lab), with a special focus on voluntary certification for product compliance.

Vitrum 2017 concludes today and will return to Milan in October 2019. Stay tuned to USGNN.com™ for additional information as it’s made available.