Construction spending continues to increase in building segments that use large amounts of glass, according to the latest U.S. Census Bureau data. 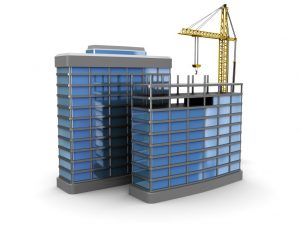 Spending in commercial construction grew 15.5 percent through the first three quarters of 2017 compared to the same time in 2016. Office construction increased 6.5 percent in the first nine months of the year.

While nonresidential construction as a whole decreased slightly through the first three quarters, it was dragged down by the manufacturing, highway/street, water and power sectors, which are hardly relevant to the glass and glazing industry. More important building categories such as commercial and office construction have been trending up. On the residential side, both multifamily and single-family have ticked up.

Office construction spending increased 6.5 percent in the first nine months of the year compared to the same span in 2016. However, on a seasonally adjusted annualized basis, spending was down 1.2 percent from August to September and 6.1 percent from September 2016.

The healthcare and educational sectors, two key categories within the institutional segment, saw construction spending increases of 1.5 and 1.3 percent, respectively, through the first three quarters. In September, educational construction was up 5.4 percent month over month and 3.7 percent year over year. Healthcare building saw a very slight 0.3-percent decrease monthly but a 0.6-percent increase compared to September 2016.

Lodging construction increased 7 percent year-to-date, with month-over-month and year-over-year increases of 0.9 and 5.3, respectively.

Multifamily building, which has pulled back over the last couple years after major increases through much of the last decade, saw a 4.3-percent increase through the first three quarters of 2017. Construction spending in this category was up 0.6-percent in September and 0.9 percent from a year ago.

“[Construction] firms are boosting employment levels, with many firms reporting that the retirement of experienced workers is resulting in rapid hiring of other workers who are hopefully trainable, but who are not yet as productive on a one-for-one basis,” said Associated Builders and Contractors chief economist Anirban Basu in his analysis. “For many firms, this dynamic is likely squeezing profit margins. Many firms are also offering significant pay increases to their most talented workers to enhance retention and delay retirement.”

He added, “All of this is consistent with the notion that proposed policy initiatives that would better support U.S. economic growth remain important even in the context of an improving economy. Beyond the tax reform initiative currently in the spotlight, one hopes that an infrastructure-led stimulus package funded primarily by private investors receives more focus during the months to come.”