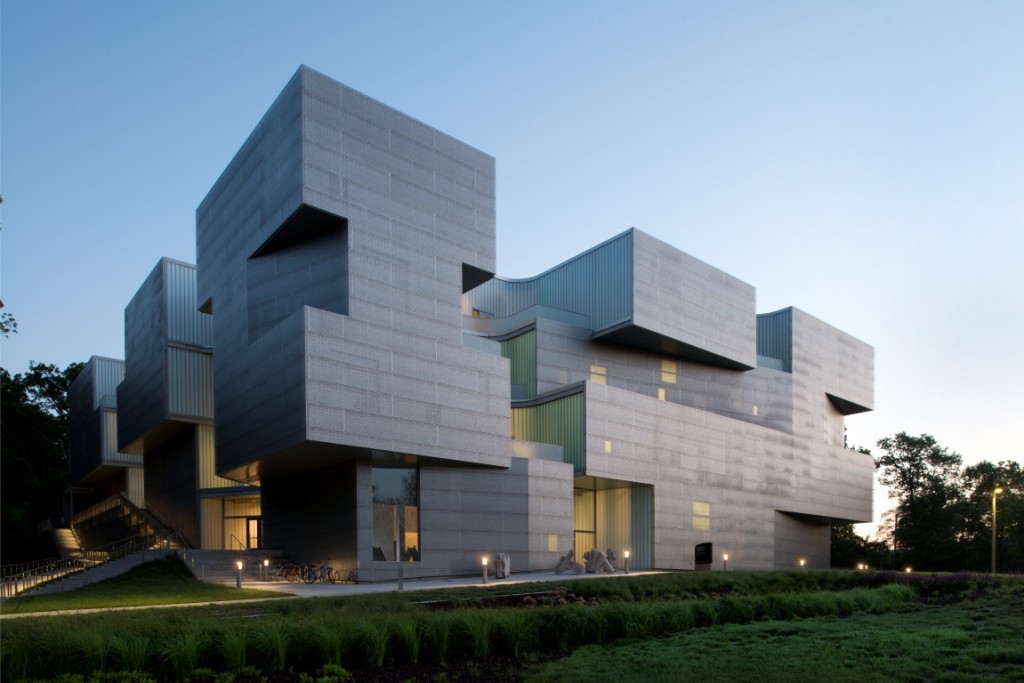 The University of Iowa Visual Arts Center’s perforated stainless steel panels bring natural light into the building through a series of scooped setbacks with 13,000 holes

The first time someone looks at the University of Iowa Visual Arts Building in Iowa City, Iowa, they will notice the large metal shapes and sleek rainscreen. These features, installed by Clive, Iowa-based Architectural Wall Systems (AWS), are the major reason it was awarded the 2017 Chairman’s Award for overall excellence by the Metal Construction Association (MCA).

The Visual Arts Building has an industrial aesthetic with 38,000 square feet of Rheinzink-cladding and poured-in-place concrete walls. The main entrances on the southwestern and southeastern sides of the building are covered in 1.5-mm perforated stainless-steel panels, which create a rainscreen system.

AWS previously completed two projects for Steven Holl Architects, the building’s designer, and was awarded the project in 2013 by Miron Construction.

“AWS saw some similarities in the channel glass detailing from the original art history building at the University of Iowa. The layering of multiple façade materials would produce great daylighting opportunities as the façade adjusted based on orientation. Overall the design presented a unique opportunity in rainscreen design principles,” he says.

AWS shop-assembled the channel glass as 10- to 12-foot-wide frames and set the pre-assembled units at each of the 23 terraces.

“This allowed the installation of the glass and white filter material within the channel glass to be completed in a controlled environment. It also allowed for 90 percent of the joint sealants to be completed before the units were onsite,” says Arnold. “A terrace could then be enclosed in two to three days instead of two to three weeks. The west and south elevations of the building are covered with continuous perforated stainless steel panels. These panels were pre-assembled in the factory and include the full 16-foot long and 8-inch deep stainless steel panel as well as a zinc panel behind with returns at the window openings.”

According to Arnold, the project presented some unique installation challenges for AWS with its radius terraces wrapped by channel glass, deep overhangs and large insulated glass units at the main entrances. Also, the size of the stainless steel panels required them to be set by crane. The layout was critically important for the panel interface with the windows and terraces.

“I thought the use of metal here was really interesting because the [it] does two things,” says MCA judge Mark Horton. “One is it creates heavier masses that are sharp forms, which I think is really nice. But at the same time the perforated rainscreens also allow it to be very light, and even translucent in other conditions, which is really interesting. The metal can allow both of those things to occur simultaneously, which is a nice use of material.”

The award was announced at a ceremony during the MCA Winter Meeting, held in San

Diego from January 22-24, 2018. According to the announcement, the Chairman’s Awards are given to the year’s most exceptional building projects involving MCA member companies based on overall appearance, significance of metal in the project, innovative use of metal and the role of metal in achieving project objectives.