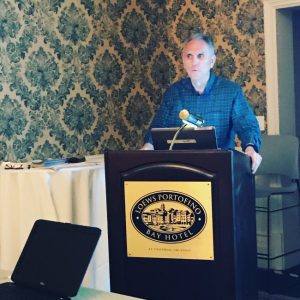 The American Architectural Manufacturers Association (AAMA) wrapped up its annual national conference in Orlando, Fla., on Wednesday with sessions that focused on regulatory issues, the U.S. vinyl industry and marketing.

AAMA’s Vinyl Material Council meeting discussed several topics based on a recent report from the association’s Regulatory Affairs Committee. One of the biggest issues was proposed changes to the Energy Star program. The 2019 White House budget plan would zero out all government funding and convert Energy Star to a “pay-to-play” program. This means manufacturers would have to pay a fee to take part in it.

Based on the discussions, the consensus in the meeting appeared to indicate that AAMA members would like to see Energy Star continue in its current form with government funding.

“Energy Star is a hell of a marketing tool,” said Steve Strawn, the director of codes and regulatory activities for Jeld-Wen. He said EPA officials have told him and other AAMA members that the total cost for the windows, doors and skylights program is less than $1 million. (Energy Star’s entire budget for 2018 was $42 million. That covers ratings for more than 75 product categories, plus new homes, commercial buildings and industrial plants.)

“The discussion is, are we willing to pay? We need to make sure Congress has our message,” Strawn said. “NFRC is a good program for rating, but it’s not a good marketing tool.”

Strawn later added that he didn’t think the Environmental Protection Agency (EPA) would change Energy Star, and he pointed out that the program has strong support on both sides of the aisle in Congress after the White House’s initial 2018 budget plan sought to eliminate the program entirely. It survived, but with a big cut in funding.

In other Energy Star news, Jeff Baker, the technical consultant for Fenestration Canada, said efforts to harmonize Energy Star Canada with the U.S. program have fallen apart. Baker said Natural Resources Canada (NRCan) wants Energy Star to be a more meaningful label in that country. He said about 80 percent of windows there currently qualify for the label, and NRCan would like that to be closer to 20-25 percent. To that end, Canada is looking to set up new criteria for 2020 that would include a .21 U-factor and a single climate zone for all windows sold in the country. (There are currently three climate zones.)

The EPA’s LRRP rule requires any renovation work — including door and window replacements — that disturbs more than six square feet of a pre-1978 home’s interior to follow rigorous and costly work practices to protect residents from exposure to lead, which can be especially dangerous for young children. The work must be supervised by an EPA-certified renovator and performed by an EPA-certified renovation firm.

AAMA wants the agency to consider changes to the rule, such as restoring the opt-out provision for homes without a child under the age of six or a pregnant woman.

“We want the opt-out provision back in the LRRP rule,” Seiling said. “We think it’s something we all need to be talking about with our local congressmen and senators.”

Finally, Seiling discussed solar panels, which many homeowners add to their roofs so the structure can technically qualify as a net-zero-energy home. Seiling said the window industry needs to address this issue by clearly differentiating “net-zero-energy” homes from other, more stringent whole-house rating systems, because solar panels are expensive and can have very long payback periods.

“We must get the message out that replacing windows can be much better and more cost-effective than adding solar panels,” he said.

Cristian Barcan of the Vinyl Institute in Washington, D.C., told AAMA attendees that things are looking up for vinyl, which represents about 80 percent of all fenestration products sold in the U.S.

“I can hardly remember a time for the industry as far as the political position,” he said. “Things have changed dramatically since the last administration.”

As an example, he recounted a meeting with a deputy EPA administrator at the Vinyl Institute’s headquarters in which he apologized to the vinyl industry for the way the agency has treated the material in the past.

Barcan’s presentation also featured charts with some interesting statistics about the vinyl industry. For example, doors and windows represent just 5 percent of the total output of vinyl in the U.S. Pipe represents about 46 percent of the output. Other major segments include film and sheet (11 percent), siding (9 percent), moulding (7 percent), and fencing and decking (3 percent).

According to Vinyl Institute statistics, the U.S. vinyl industry has more than 2,900 processors who employ more than 350,000 workers. The industry makes a $54 billion contribution to the nation’s economy.

First, AAMA is considering which content it might add or remove from the annual market study it conducts in conjunction with Ducker.

Next, the committee shared the updated version of AAMA’s consumer-facing brochure, “Caring for Your Windows, Doors and Skylights.” It’s been completely redesigned for 2018 and reformatted with a more user-friendly layout for the Web. Copies should be shipping soon, said Angela Dickson, AAMA’s marketing and communications director.

Solomon said sustainability standards are growing across a wide range of raw materials, especially in industrial applications and B2B. She said research during the past 10 years shows they can help address sustainability challenges in supply chains. These standards programs generally rely on a mix of performance requirements and chain-of-custody tracking.

While the technology is still fairly new, Solomon said innovative approaches to data management for certification could increase efficiencies and eventually transform the sustainability movement.

Agricultural programs were first into this space, Solomon said, but programs related to metals are pioneering new supply-chain-based models that recognize the role of manufacturing. The next advancement would be the development of harmonized programs across different metal commodities.