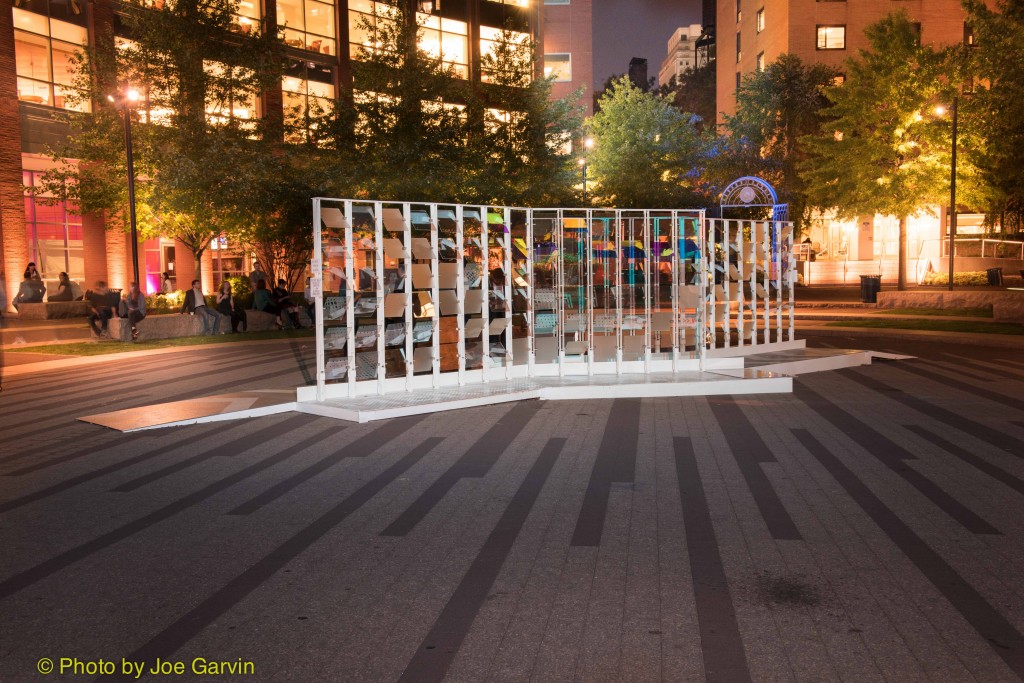 Buildings aren’t always designed with input from the crafts people charged with the actual construction, which can lead to delays and cost overruns. To improve the process for future projects, third-year architecture students and apprentice glaziers partnered with industry professionals for MERGE – a hands-on project featuring glass to conceptually link the campuses of Jefferson University.

“MERGE is designed as a symbolic gesture toward the newly combined Philadelphia University and Thomas Jefferson University,” says Stephanie Staub, director of marketing at AGI. “Two glass walls, each representing a university, form a pathway while shimmering in the sunlight and reflecting the surroundings. Each wall is made of small square pieces of glass with different reflective qualities, providing different views of the surroundings, and operating like the eyes of many insects seeing in all directions. The overlap of the two walls has the greatest transparency. Multiple views and reflections perceived at this merge point are emblematic of the two universities bringing different disciplines together to form new views on the future of education.”

“CRL donated all of the standoffs and JEB did the tempering and seaming of edges. The contractors all provided guidance to the students of the design/build course. They were an integral part of helping the students understand the material options for this project (everything from comparing aluminum extrusion posts to steel posts with welded webbing),” says Staub. “Wiss Janey Elstner (WJE) ran all the structural engineering calculations and provided its engineer stamp.  The project was a free-standing exhibit, so it had to be weighted for safety and the engineering calculations were critical for this.”

AGI has had a long-standing relationship with Philadelphia University’s director of architecture programs Jim Doerfler.

“AGI hosts a boot camp program for each of Doerfler’s high-performance building envelope classes. He and I together came up with the idea of the student design competition and subsequent design/build summer course with architecture students and FTI glaziers as a way of taking our relationship to the next level. There is no better way of learning than by doing,” says Staub. 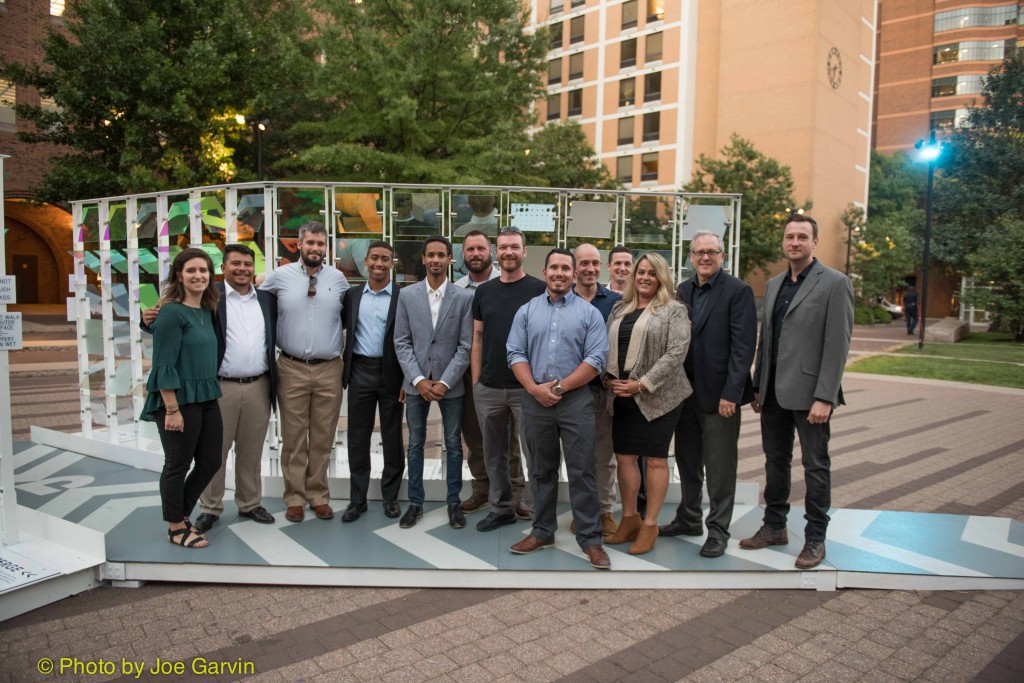 The competition formed the first stage of the MERGE experience. Over the summer of 2017, a special design-build course run through Philadelphia University teamed six architecture students and six FTI glaziers under the guidance of Jefferson University professor Jeff Kansler and FTI instructor Steve Metzger. The group refined Jefferson University architecture student Ryan Mann’s winning design and fabricated it for exhibition. The design portion of the course took place more than three weeks in May 2017. The build phase took place throughout August and September of 2017.

The intent of the project was to enhance the academic experience of architecture students specific to the use of glass, and for them to gain a better understanding of construction methodologies related to their designs.

“Architects must be sensitive to and understand the value glaziers bring to a project, and vice versa,” says Terry Webb, president of Eureka Glass. “Projects are getting more complicated and budgets are getting tighter, so if we can show students the importance of being true partners, they will be able to contribute immediately to making design and construction more efficient.”

The students appreciated the new perspective on design.

“I think my peers have missed out by not being part of this project,” says Jessica Schell, Jefferson University architecture student. “When I draw a post, it’s a line. I didn’t think about whether it was a solid post, or a welded post; I just drew a line. I realize how not specifying what I meant not only leaves ambiguity, but it also has a significant impact on the project costs and timeline, as well as the design.”